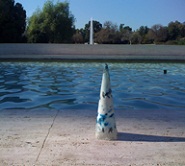 The latest release from the Absence of Wax netlabel is a lengthy rumble by Albert Ortega. Based in Los Angeles, Ortega reportedly mixes field recordings and electronic processing to achieve his unique, partially “real,” partially “artificial” ends. Little of the real world is necessarily evident in one such final result, “Internal Weather,” but the track’s title and sonic properties hint at what is going on.

As for that title, “Internal Weather” touches on the way a systems-based compositional approach such as Ortega’s can come to constitute its own small-scale ecosystem.

Proceed to devinsarno.com/absenceofwax for free streaming and download. Caveat: the download is enormous, almost half a gigabyte.

One thought on “The Beauty of the Unintended Rhythm (MP3)”