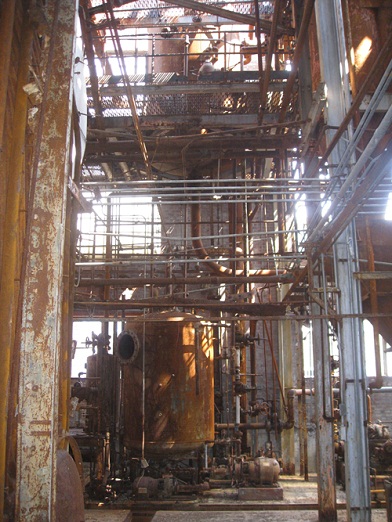 Pipe Organ: The Boiler House at MASS MoCA, site of Stephen Vitiello’s All Those Vanished Engines

To follow up the interview posted here earlier today with sound artist Stephen Vitiello (“In the Echo of No Towers”), here is a download (and stream) of an edit from the long-term installation he has recently unveiled at MASS MoCA, the Massachusetts Museum of Contemporary Art in North Adams, Massachusetts. The work, titled All Those Vanished Engines, is a collaboration between Vitiello and the novelist Paul Park, who wrote a narrative that Vitiello then set to sound. This edit removes the spoken vocal, to reveal the underlying current of pneumatic activity, a kind of steampunk ambient music:

In the interview, Vitiello describes how he asked Park, a science fiction and fantasy novelist, to write a story that created a fictional world built around the Boiler House: “I then recorded the story,” he says, “and laid sound around the events that were described. From there, I took out some of the spoken language, leaving the sound itself to convey the narrative.” As the descriptive text at the museum’s website, massmoca.org, explains, “Starting with the inherent resonance of the pipes and metal drums in the space, Vitiello built a layered sound installation that can be explored throughout the first two floors of the building.”