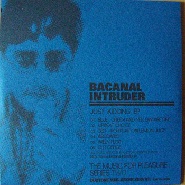 The first appearance of the word “bacanal” on this website dates from April 26, 2005. As with subsequent appearances here of that word, it related to a release by Bacanal Intruder, a wonderful laptop musician based in Spain whose music is routinely marked by a blippy breeziness, a winsome glitch that that suggests nothing less than Jacques Tati’s giggling at the absurdity of automation, a kitchen-sink approach that is like sonic clutter that suddenly snaps into place — if by “place” is meant an intricately coordinated, rhythmically ingenious, jubilantly playful compositional zone that the Intruder alone inhabits. He’s recently begun posting tracks to a soundcloud.com/bacanalintruder account, among them the six items that constitute a 2005 EP titled Just Kidding. In the posting he quotes a review that sums it up well: “this little masterpiece full of little hymns and transparent melodies. … [W]e find trumpets, trombones, clarinets, horns, harp, tuba, celesta, violins, congas, spoons … All perfectly seasoned with lively house brand rhythms.”