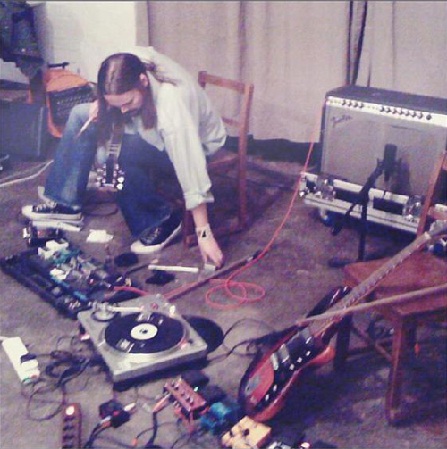 It will be interesting to read retrospective impressions, a decade from now, about the generation of musicians who gave themselves over to the drone — a generation of musicians who dispensed with the recognizable and memorable sequences of melodic elements of their recent predecessors, and instead distinctly favored a tonal bliss (and seeming stasis) whose unique properties divulge themselves only through close listening, deep patience, and side-by-side comparison.

There will be vast amounts of music to be revisited, ranging throughout genres, from doom metal gongs to rural country ambience to everday noises derived from the realm of European free improvisation. No doubt the work of William Fowler Collins will be considered. Perhaps drone scholars will focus on the recording of his live performance at the On Land Festival in San Francisco from 2009. An MP3 of it was posted earlier today for free download at the website of the record label Root Strata (rootstrata.com), which sponsored the concert series, and it is already circulating widely. (It’s enclosed in a Zip file and housed on the mediafire.com service.)

I was at the concert. In my review at the time, “On Land Festival, Opening Afternoon,” I noted how Collins, who performed solo, “evoked his adopted home of the southwest by producing rich, feedback-intense approximations of Ennio Morricone soundtracks; he patiently limned the delicate no man’s land between abstraction and melody.” As heard in the MP3, the concert was even darker than description at the time suggests. When the sound of a lap guitar arises, it’s as if a whole world of hurt has been unpacked from a single chord from an old Bob Wills and His Texas Playboys recording. When waves of feedback waft up, it’s like the the entire Neil Young catalog has been set afire. And on the occasion when rhythm dares to present itself, as a nascent chugga-chugga, the failure — the determined failure — to resolve into a deeper, more trenchant phrasing reveals the piece as an especially maudlin vestige of doom metal. The sense of ritual, of ceremony, makes a very strong impression.

Track originally posted at rootstrata.com. More on Collins at williamfowlercollins.com.

He has a new album, The Resurrections Unseen, out on the Type label, and it is streaming freely at soundcloud.com:

More on the new release at typerecords.com.