Caught the initial concert of the three-event, two-day, first ever On Land Festival in San Francisco. It featured a mix of electronic music, freak folk, and post-rock on Saturday, September 19 (the first two shows), and Sunday, September 20 (the closing show).

The Saturday afternoon event, held in the Swedish American Hall up above Cafe Du Nord, featured seven acts, and opened with Danny Paul Grody, whose band Tarentel would headline the main show later that evening. Grody’s mix of blue-sky keyboard aether and short, melodic loops of guitar and vocals elicited a riotous applause after a brief set. The response seemed as much an appreciation for the festival overall, founded by the Root Stata record label, as for Grody’s performance. 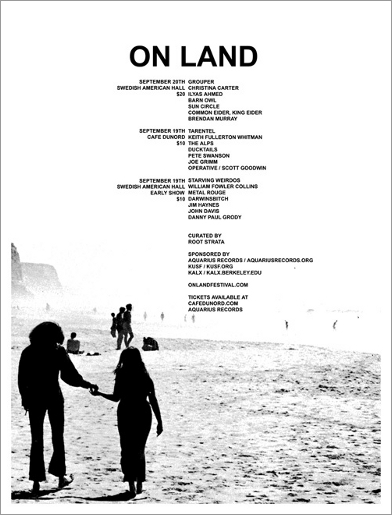 Loops were a common theme that afternoon. John Davis, who followed Grody, played with Root Strata co-founder Maxwell Croy. Together they produced tremulous koto notes (both plucked and bowed) above a droning foundation. Then came Jim Haynes‘s slowly accruing thickness of small sounds, including taut cycles of bell-like tones, as well as swaths of audio detritus resulting from attaching contact microphones to ephemera.

If loops provided a theme to the evening, that theme may have had its starkest evocation during the solo set by Darwinsbitch (aka laptop-mediated violinist Marielle V. Jakobsons). There’s something pleasing about hearing a violin being played while the instrument rests, unbowed, on the neck of the woman who, only moments before, had been playing it. The experience is both ghostly and technological, magical and mundane. This isn’t the pleasure of a routinized computer task, or of a car set on cruise control, or of a direct-deposit check; in other words, this isn’t about automation. The looping that formed the basis of Jakobsons’s music is the result of conscious decisions on her part, decisions that are no more or less meaningful than when she (as with any musicians who successfully invite looping into their work) pulls her bow across her strings. In fact, as the layering of sound gets more and more substantial, a musician’s ability to manage that accumulation speaks to a significant amount of consideration and skill. In the case of Jakobsons’s set, this meant a flurry of cloud-like noises that slowly subsumed any familiar texture or tone inherent in her instrument.

William Fowler Collins evoked his adopted home of the southwest by producing rich, feedback-intense approximations of Ennio Morricone soundtracks; he patiently limned the delicate no man’s land between abstraction and melody. Collins’s set provided a transition back to the ambient-electronic realm from Metal Rouge, a boisterous trio that combined guitar, drums, trombone, and vocals into something that approximated the controlled chaos of free improvisation, but wasn’t entirely out of place amid the more introspective sounds that ruled the afternoon. There’s something incantatory about this brand of free improv. Rouge guitarist Andrew Scott summoned up something approximating a John Barry score with his deep delay and soulful strumming. Recently expanded to a trio, the group included not only longtime member Helga Fassonaki on guitar, but also the impressive Caitlin C. Mitchell on drums and trombone.

Closing act the Starving Weirdos were well-programmed. They served as a culmination of the afternoon’s various sounds. The group’s four members employed everything from noisemakers to electric guitar to keyboards to found recordings to effect-filtered vocals in an effort to produce a rhythmic percussive circle (the range of tools was too broad for the more familiar “drum circle” to suffice) that exemplified a philosophical and practical cornerstone of the intensity of this realm of music: minimalist impact from maximum effort.