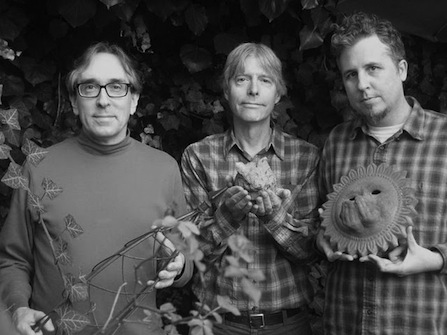 Amorphous music becomes all the more so when live performances are experienced on tape. Take Cloud Shepherd‘s work, for example. With all the gravitas of a dark ritual, it unfold in mystic proportions: droning intonations, whisps of sonic smoke, percussion that seems to resonate with unseen forces. Unseen forces, of course, are key to the listening experience when one hears a recording of a live performance. It isn’t especially clear who is doing what. For a new listener to jazz, it can be a learning experience to distinguish saxophone from trumpet, let alone a tenor sax from an alto. In improvisatory zones that lean toward space music, such as Cloud Shepherd’s appropriately titled album Unknown, the challenge is even more significant. The best response to the challenge is to ignore it. Spend less time trying to sort out what the instrumentation is, and more on the overall flow.

And lest the improvisatory intent and droning undercurrent suggest otherwise, Cloud Shepherd are not without a sense of humor. The lyrics to the first of the album’s five tracks are provided, thanks to a handy Bandcamp tool. These lyrics consist of a single word: “Oohwowwowza.” And while the first four tracks are named for their track numerals, the fifth track appears to be titled “6.”

Cloud Shepherd appears to consist of three members — Andrew Joron, Brian Lucas, and Joseph Noble — though information is somewhat scarce (one album cover appears to feature four individuals). Get Unknown and other Cloud Shepherd music for free download and streaming at cloud-shepherd.bandcamp.com. (Photo borrowed from wehavenozen.blogspot.com.)

One thought on “Lost in the Clouds (MP3)”