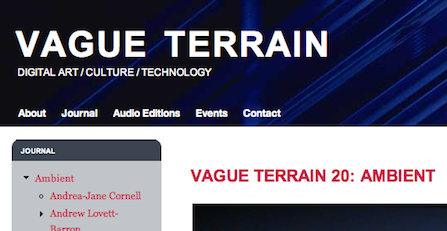 I have an essay about the sonic environments of New York and Las Vegas in the 20th issue of the excellent journal Vague Terrain. This issue of Vague Terrain takes as its theme a single word, “ambient,” and the invitation to contribute led me to focus on the sounds in the background that come to the foreground. It opens as follows, before proceeding to annotate various sonic experiences during a two-week period this past August when I listened to no pre-recorded music — well, no pre-recorded music that I myself actively elected to play:

Music is sound that someone has taken the time to organize. Generally speaking, that person is called a musician. Not all sound is immediately enjoyable as music, which means that achieving the goal of music can require widely varying levels of exertion and ingenuity on the part of the musician. Some everyday sound has an inherently musical quality, such as the beat of a windshield wiper or the hum of an apartment radiator. This sort of sound is so self-evidently musical it can be said to self-organize, requiring no effort on the part of a musician, or on the part of the listener. Everyday sound is the sound nearly universally thought of as background noise, noise even further back than background noise ”“ it is the sonic backdrop to background noise. Such noise can take on the qualities generally attributed to music depending on the effort a listener is willing to make. Far less effort is usually required on the part of a listener than on the part of a musician. What helps sound take on the appearance of music is the model provided by music.

Read the full piece, “New York and New York, New York: A Midsummer Sound Diary,” at vagueterrain.net. As a format, the sound diary has a precedent here in the well-received “Tokyo Sound Diary” I published back in 2007.

I’m proud to be in Vague Terrain, a great resource for considered reflection on technologically mediated culture. This is a particularly strong edition. Here’s a quick overview:

In my favorite of the batch, Michel McBride-Charpentier listens to the everyday sounds of a video game, Half Life 2, and considers the artificial reality in the context of R. Murray Schaefer’s research on soundscapes. In a fascinating turn, reminiscent of some of Jane McGonigal’s perceptions, the narrative turns the tables on reality: “The sound of traffic in an actual city isn’t just atmosphere, but subconsciously processed evidence of radiating streets forming blocks and neighbourhoods, giving us confidence in our unperceived reality.” (I actually pitched a similar subject when approached to contribute to the issue of Vague Terrain, but McBride-Charpentier had beat me to it. I hope to write about the artificial sonic environments of video games in the near future.)

Musician David Kristian contributes a free download, which I’ll be covering in this site’s Downstream section in the near future.

Andrea-Jane Cornell provides a track, and an admirably detailed and open self-critique of her attempt to record it (“I was too intent on recreating the ambiance of a live performance of a piece”).

Andrew Lovett-Barron pulls back, fortunately, from sound and discusses ambient interaction (“the subtle gesture, the shifting of weight, and the tone of voice which tell your friend that something is wrong”), and pushes into the manner in which such interactions can be enhanced or insinuated with digital tools.

Jim Bizzocchi, like Cornell, is an artist describing a practice, in his case ambient video, drawing a direct connection between what he is attempting to do, and the aspirations of Brian Eno’s genre-defining work.

Leonardo Rosado talks about his own music-making, and how his art production aligns with his work as the administrator of a netlabel, the estimable Feedback Loop.

Little Oak Animal is the duo of Robert Cruickshank (projections) and Dafydd Hughes (sound), who contributed a series of short pieces in which neither part (the image or the audio) is intended to take a more prominent role than the other.

Michelle Teran is interviewed by Greg J. Smith (the editor for my piece) on the art of surveillance and finance, among other fascinating subjects.