Welcome to the third major visual iteration of this website. The back-end changes were just installed, as of 10:20pm Pacific Time. If you see any major errors in the coming days, please let me know. (There’s much to be done in terms of fine-tuning, but the majority of the site is in place. All the posts are up. There are fonts to be adjusted, category pages to be aligned, and some taxonomy to be attended to, among other things.)

Disquiet.com was founded 15 years ago tomorrow, December 13. The alpha version of this site was a port of some materials I’d housed under generic addresses in the years prior to December 13, 1996, when I purchased this URL.

From 1996 through the summer of 2007, the site was built in hand-coded HTML. The following is the earliest record of Disquiet.com in the Wayback machine at archive.org: 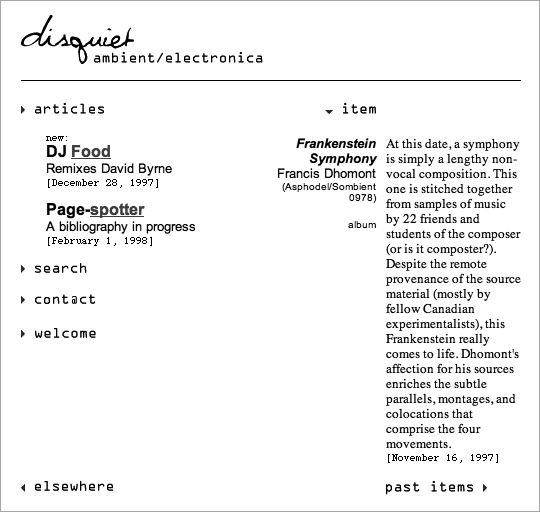 From 2007 until today, December 12, 2011, the site was managed in WordPress in a theme produced by with elegance and professionalism by Nathan Swartz of clicknathan.com. Swartz’s theme was a refinement of the original Disquiet.com design.

And as of today it is still managed in WordPress, but in a new theme produced by the great futureprüf.com. This new theme further refines the longstanding Disquiet.com design. Among the changes:

Â¶ the number of categories has been significantly reduced (much of the site has been consolidated under “field notes”), though all the posts remain

Â¶ one new category (“projects”) has been added

I’ll have more about the 15th anniversary of this site tomorrow. Now, it’s time to get to bug-checking.