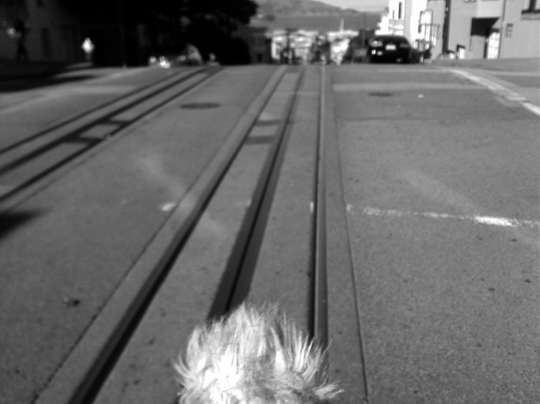 Audio Flaneur: The excellent soundscrapers.blogspot.com by Nick Sowers is three deep in a new series of “Lunchwalks.” What’s a lunchwalk? Explains Sowers, “Got an hour? Take a walk. Inside of a thirty-minute radius, an infinitely detailed (though finitely bound) landscape is within reach.” On each walk, he records the sounds he encounters. He maps the walks, and takes photos, which tend to feature his microphone, which in turn takes on the appearance of Sowers’ fuzzy walking buddy (see above). His descriptions are splendid (“The gear boxes and cable junctures add a constant hum to the background static of the city”), and he also posts samples of the audio, such as this from his third walk:

Read them, as his walking progresses, at soundscrapers.blogspot.com. 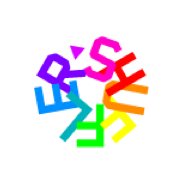 Banner Music: I don’t look too deeply into the statistics for this site. When you write about free music and about galleries that require no entry fee, as well as commercial music that often sells in the under-500-unit zone, the whole notion of pageviews can be an exercise in misdirection, if not futility. I do take note, because the dashboard in WordPress (the publishing tool that is this site’s backend) puts the information front and center, that this site seems to get a lot more visitors via Facebook than Twitter, even though I dedicate more time to Twitter than to Facebook. (Perhaps the automated posting of Disquiet’s RSS feed to Facebook that currently occurs is something I should do more of on Twitter? Somehow that doesn’t seem right. My approach to Twitter is conversational.) Anyhow, in the mix of sites sending somewhat significant traffic to this one is a service that was previously unfamiliar: shuffler.fm. The site is an aggregator of blog-filtered music (it bills itself as an “audio magazine made by music blogs”). You can search and sort by artist, genre, blog, and so forth. And, niftily enough, you can end up navigating this very site with a top bar that lets you listen to the music on a given page and navigate the site that way. The following link, unlike the previous one in this entry, will take you to an example: shuffler.fm. For the time being, the shuffler.fm service doesn’t seem to be infringing on this site’s non-commercial Creative Commons license, though there is a page on the site that talks about advertising.

Outside Man: Perhaps the craziest thing about the movie Bunraku isn’t its surreal set (part Kill Bill, part Sin City), its peculiar cast (Demi Moore and Ron Perlman and Woody Harrelson and Josh Hartnett), or the voice of its narrator (Mike Patton, of Faith No More, Mr. Bungle, FantÃ´mas, etc.), but that the score is by trumpeter Terence Blanchard, best known for his numerous Spike Lee films. (The New York Times called the movie “a potpourri of genres that ends up a morass of clichés”) Back in reality, Blanchard is also tied to Red Tails, about the African American Tuskegee Airmen.

Dark Portal: The second and third freely downloadable volumes of the score to the excellent video game Portal 2 are available at thinkwithportals.com. The first volume was covered here in late June, in the Downstream department. (Via joystiq.com and nobuooo.com.)

Polluting Noise: Noise pollution is a subject that gives noise a bad name. A story in a local news site in my area, the San Francisco baycitizen.org, touched on how emotions color perception of noise: “On Sept. 12, 2001, no flights took off at San Francisco International, but complaints were lodged nevertheless.” The science-and-scifi site i09.com has been noting how birds and dolphins have shown adverse effects of human-made sound.

The Listener: Author Warren Ellis has launched a new podcast. Second episode came out the 5th of this month, at warrenellis.com, featuring such Disquiet.com favorites as Daphne Oram and Scott Tuma. Episode one had Moondog and Tangerine Dream.