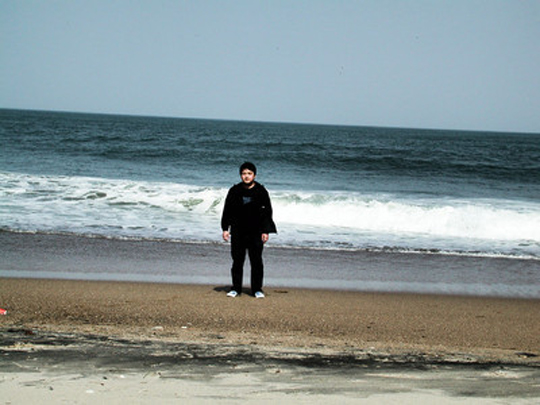 The beauty of Soundcloud.com is the extent to which its fluid interface and communal spirit seems to inspire musicians to post works-in-progress. For every full-length album that is posted for pre-purchase streaming, there are hundreds of rough sketches (perhaps best considered both descendents from and precursors to what were once called “demo tapes”). For example, the Japan-based musician Saito Koji (whose work has been mentioned here on more than one occasion) recently posted what appears to be his first track (or he has long had an account and wiped it clear — either way, there is only one track as of this writing at soundcloud.com/saitokoji). It’s just 38 second in length and features a slow, reflective acoustic guitar line against a thick wave of white noise — the latter aspect could be traffic, or, based on the photo that accompanies his site as of this moment (see above), it could be surf. It could also be an oscillator functioning in the depths of an apartment building. One doesn’t know. What one senses, though, is the isolation and meditative cast to the music. Given its brevity and the terse sensation at its close, it is more likely an experiment than a miniature, more likely a piece of a future whole than something intended to be considered on its own. The song might be titled “Sayonara,” but one hopes it is, in fact, a beginning.