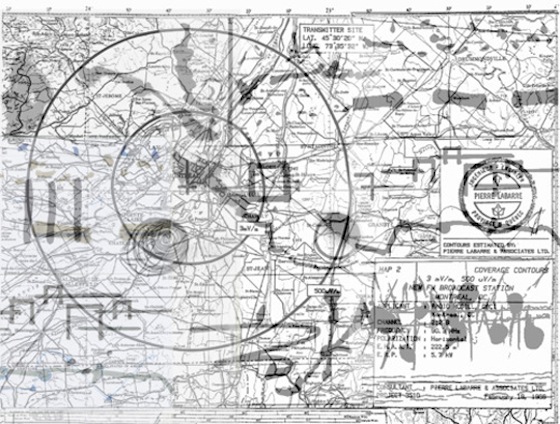 The great ongoing Radius broadcast/podcast often takes radio its subject. Those entries carry additional meaning because the series’ name suggests a circumference of available signal, and because the catchy glitchy sound that opens each episode is derived from broadcast technology (see “Entering and Exiting the Electromagnetic Spectrum”). “Rise and Shine” is just such a segment: a live and improvised performance by Emilie Mouchous and Andrea-Jane Cornell that concerns itself with the way the landscape shapes radio signals. The result is an extended conversation played out between thick, wavering tones and momentary snatches of disruption.

At the hosting site, the duo explain the narrative that informs the performance:

The piece responds to the clarity of local signals in Montreal that are obscured in areas directly adjacent to the main radio tower transmitter site atop Mount-Royal. The areas situated in the shadow of the mountain, where there are no sight-lines to the tower, have poor reception because the signal must pass though the ground to reach the receivers. The signal is only received in mono and occasionally cuts out intermittently for indeterminate periods of time. Rise and Shine begins with undulations, like the intermittent signals in the mountain’s shadow; a rising and falling, an ebb and flow of tones meditatively sweeping through the frequency range that stretch the spectrum that is most receptive to the combination of signals. Once the space is carved out, the piece unfolds at a languorous pace, evocative of a hot summer night when the air is thick and sleep comes in waves carrying episodic dreams linked together by a common thread.

More on the piece at theradius.tumblr.com. Emilie Mouchous and Andrea-Jane Cornell are based in Montréal, Québec.