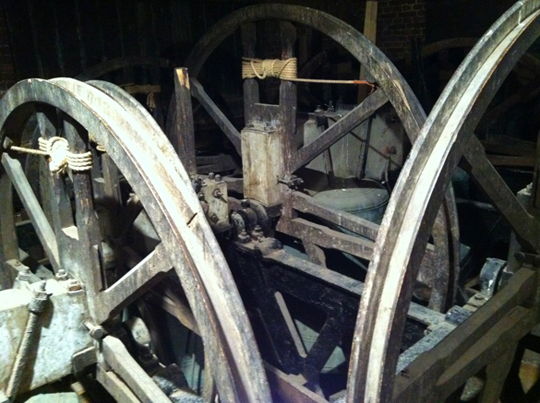 The saying goes that a broken clock is right twice a day. The thing about a fully functioning clock is that it means different things at different times of the day. The noon bell, for example, is a midday alert. Even if the noon bell also happens to signal, say, a Latin mass, it provides a secular timekeeper for everyone within earshot. Other times might be synchronized with things other than the nearly universal 24-hourly intervals: religious events (services) and semi-secular ones (weddings) generally fall off the strict hour/half-past regularity. Even when slight, discrepancies in timing can feel significant, or at least meaningful. In the neighborhood where I live, the noon bell rings each Tuesday just after a noon siren calls out across the city (actually a network of sirens, all slightly off sync). The noon church bells always start slightly after the alert ends (the siren consists of two parts: an alarm, and then a spoken announcement). It’s unclear if the alert comes early or if the bells late, but they long ago reached some sort of sonic armistice.

The great Touch Radio podcast noted the end of 2012 with an extended recording of bells (MP3), recorded in the belltower of St. Mary’s Church, Walthamstow. They were no doubt intended to signify the close of a year, but they were, in fact, if the data in the RSS feed is correct, released eight days prior, and in fact recorded a full month prior. The bells rang any number of times between November 30, when they were recorded, and January 1, 2012 — and thanks to the podcast MP3, they will continue to be heard into the future, each time signally something slightly different: coinciding with an event, looking ahead to one, or bringing to mind something from the past.

And, for that matter, the bells find themselves occasionally excepted from timekeeping duties, and listened to for their sonic properties. There is a particularly eventful sequence at around the eight-minute point when decay and overlays combine to create illusions of more bells than are in fact ringing — the reverberation almost takes on the appearance of backward masking, which is ironic given the association of backward masking with Satanism.

Track originally posted (“With thanks to Denis Hewitt & Ewan Marshall”) at touchradio.org.uk.