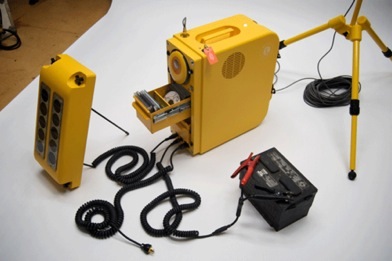 Looper’s Delight: The Audio Relay unit that both serves up the Radius broadcast and provided its chance theme music

Some sounds are too good not to be looked into more closely — not just listened to closely, but inquired after. The great Radius radio show and podcast out of Chicago (theradius.tumblr.com) opens each episode with a lightly squelchy buzz of tone. It’s a fractured bit of ether that matches the show’s overall aesthetic, from the lovely simplicity of its logo (a volume knob at its most rarefied) to the elegance of its black-and-white website design, all the way down to how it has personalized the Soundcloud.com waveform visualization to match its greytone approach. And of course, there is the structured noise by composers and sound artists — among them Michael Woody, Margaret Noble, Sturqen, and Noé Cuéllar — that is the series’ subject matter. You can hear the opening sound and some of the subsequent podcasts at soundcloud.com/thethetheradius, and view the mentioned graphic elements as well as read more about the series at its website.

Having written about Radius podcasts in the past, I sent in an email asking about that opening noise. Truth be told, I didn’t at first even realize it served as a theme to the show. When I heard my first Radius podcast, I just thought that initial tonal material was part of the overall music being presented. Only later, with subsequent entries in the series, did I realize it was theme music.

Radius’ Jeff Kolar wrote back to explain what the opening sound is. He refers to it as the “Radius loop”:

The Radius loop file is a live field recording using Radius’ low-powered FM transmitter. Radius uses a mobile FM radio transmitter called the Audio Relay, a collaborative project between Temporary Services and Brennan McGaffey. More information about the Audio Relay can be found online here: theradius.tumblr.com/audiorelay. The “Radius loop” is a field recording of the Radius transmitter powering up for the first unregulated broadcast on local 88.9 FM. I accidentally forgot to ground the radio signal, which caused the transmission to fade in and out, back and forth between the un-used commercial station, and the Radius pirated signal. The static glitch is the sound of Radius entering and exiting the electromagnetic spectrum once every 2 seconds.

A chance recording of a unique piece of technology functioning in an unexpected manner, a true glitch. It is difficult to imagine a more fitting sound to serve as the theme for the Radius series.