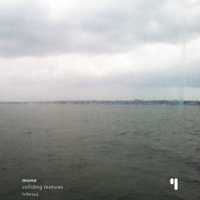 Among the many good things that have come from the increasing prevalence of drone-based music is a clarification, a realignment, of the word “industrial.” Thanks in addition to the rise in field recordings as broadly produced and consumed sonic media, the word “industrial” has ceased meaning simply a pounding nightife nihilism akin to an ersatz jackhammer beat, and come to mean a sonic aura akin to or actually resulting from a mechanical process. And that why it is a term that can be applied to much of Colliding Textures, a four-song release by Mon0 on the great Test Tube netlabel. The album’s initial two tracks, “Cathedral of the Lost” (MP3) and “Marching into Desperation” (MP3), in particular seem to document some unimaginably vast industrial process. (The album comes with a humorous if, based on personal experience, hyperbolic warning: “Beware of the heavy use of bass frequencies, because these tracks might break your living room windows if you put your amp volume too loud.”) They are monotonous in all the right ways, which is to say to an extent that veils their underlying urgency, their sense of intense inward momentum.

Get the full set at monocromatica.com. More on Mon0 at mon0.de.