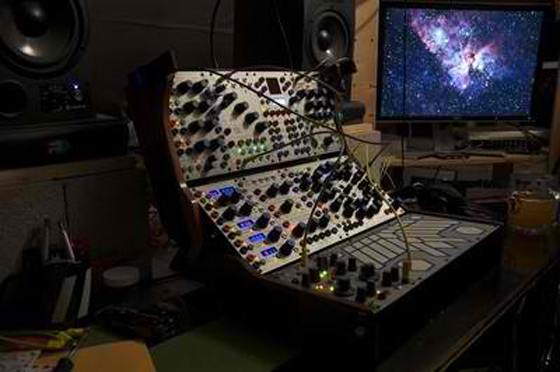 Pretty much the full run of recent tracks posted by the near-anonymous ngngngngngngng (from: “easthampton, United States”) share a single tag designation: “Buchla,” as in the modular synthesizer. Many of the tracks are annotated with little more than the numerical signifiers of which modules are being employed. For example, “secreters” is listed as “259e 266e 281e 292e,” to which is appended a more human-readable “ping pong delay.”

Another, more chaotic series of beeps and bloops, titled “Plastic Walls,” is labeled “Playing the 259e with the 222e through the 250e’s external inputs.” And it adds, showing that memory can be even more obfuscating than a desk of patch-cord spaghetti: “At least I think that’s what’s happening, this is an older recording i just found.”

As for the image up top, it’s from a track titled “272e01”: “Very simple patch. 281e pulsing quickly through 3 station presets one tuner of the 272e.” It’s like a super-fine radio dial switching back and forth, like the most taut pause tape you might imagine.

More from ngngngng at soundcloud.com/ngngngng. The small pieces are well worth following, especially given the promise of something more substantial down the road.

One thought on “The Dada of the Buchla (MP3)”