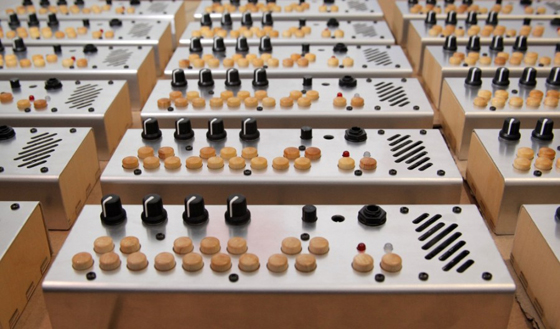 The rise of virtual machines has not, in fact, done away with physical machines. If anything, the opposite is the case. The rise of virtual instruments, from soft-synths to digital drum machines, has led to a wildly diverse landscape of music tools, which in turn has freed up the common understanding of instruments, and led to increased innovation of physical instruments. How else to explain the Monome, the OP-1 from Teenage Engineering, the Miselu neiro, and numerous other standalone devices, not to mention the expanding array of controllers for Ableton? Or, for that matter, the Pocket Piano? The latter is the tidy device, pictured above, that Seams (aka Jami Welch of Berlin, Germany, aka the fellow who interviewed me for the recent Soundcloud podcast about various Disquiet.com projects, just shy of 14,000 listens) employed in the performance of a tasty little bit of restrained funk. The lo-fi sound results from the manner in which it was recorded, a process described by the track’s title: “Pocket Piano via Dictaphone via iPhone.”

Track originally posted for free download at soundcloud.com/seams. More on the Pocket Piano at critterandguitari.com. More on Seams/Welch at seamsmusic.com.