When the Rain Comes, We Run and Record a Sound Bed (MP3) 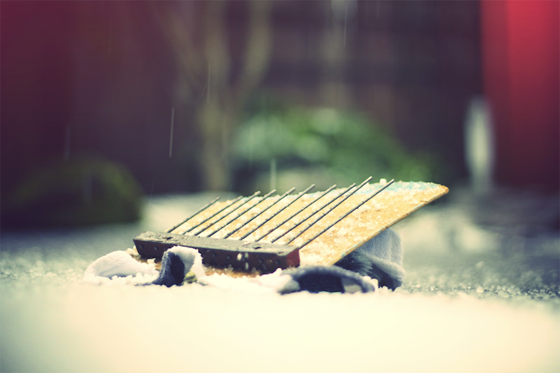 Generative music has that name because of the manner in which the results follow patterns that resemble natural systems. From Conway’s Game of Life rules to Brian Eno’s Bloom app, real-world environmental activity serves as both model and metaphor. Marcus Fischer recognizes the natural environment as not only a precursor to generative sound, but as a source of generative sound as well. He has an ongoing series of experiments in which precipitation serves as the instrumentalist. In the latest, he captures the sound of hail “striking the tines and soundboard” of a kalimba. The result is lovely even as it approaches wild rhythmic discordance. The familiarity of the sounds and the percussive nature thereof provide such a comfortable context that the randomness of the striking never veers too far from something one might imagine to be a composed or human-improvised performance. Which, of course, it is, in a broad sense: Fischer may not have played the notes himself, but by recognizing a particular force as having musical quality, and by harnessing that force, he serves a meta-compositional role.

Track originally posted at soundcloud.com/mapmap. More on Portland-based Fischer’s activities at unrecnow.com. The image above accompanies the post, and shows the setup that yielded the music.

Update: Via Twitter, Fischer clarified that contrary to appearances, that isn’t a kalimba: “@disquiet thanks marc. Quick note: not a kalimba, those are the exposed guts of a toy piano. Looks/sounds kind of like one though.” So, I changed the title of this entry. It had been: “The Rain in Portland Falls Mainly on the Kalimba”