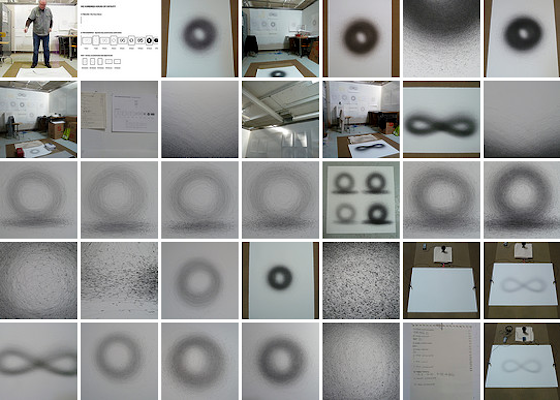 I was honored to have been asked by John Kannenberg to contribute the foreword to the catalog for his exhibit Hours of Infinity. The introduction is by Egyptologist T.G. Wilfong. The catalog will be published this Friday, March 23. The exhibit consists of three parts, which have been running in Ann Arbor, Michigan, throughout this month. The work began as Kannenberg’s thesis project for the MFA program at the University of Michigan’s School of Art and Design. Much of it is being presented at the Kelsey Museum of Archaeology (lsa.umich.edu), which ties together numerous aspects of Kannenberg’s past work, including sonic documents of everyday life, the cultural impact of ancient Egypt, and the institutions we call museums.

Here is the text of the forward:

Consider the word “phonography.” Note for a moment that there is an “n” where normally one would expect to find a “t” residing. The term is employed with increasing frequency to describe the act of recording environmental sound, the sound around us. The term’s close alignment with “photography” is helpful when orienting newcomers to field recordings. A phonographer, like a photographer, captures a document of the real world and then proceeds to frame it, transforming it from documentation into art. Photographers are taught to “frame with the lens,” but of course they employ all manner of tools after shooting an image to nudge it toward what they saw with their mind’s eye. Likewise, contemporary music composers frequently take field recordings and from them produce original works, in which the recordings are manipulated into something situated ambiguously between ambient sound and ambient music: what they heard with their mind’s ear.

As a descriptive term, “phonography” has utility, but associations with photography are not optimal. Sound occurs over time. For that reason, field recordings have more in common with film and video than with photography. One can stare at a photograph, step away, return to it. But a recording of sound or visuals, or both, plays back at its own pace; the audience can only appreciate it as it speeds past them, much like the tireless motion of history.

History can itself serve as a frame. In 2010, the artist John Kannenberg took a trip to Egypt, where he made detailed audio recordings in and around local museums. The Western imagination associates Egyptian antiquity with the deepest recesses of human history, a moment akin to dawn along the infinite developmental timeline of intellectual consciousness; the setting lent his work spiritual as well as archeological timbres. By documenting the sound of museums, he turned the concept of “sound art” inside out: listening for sound inherent in institutions that house art.

Little did he know that in less than a year, one of those museums would become a battlefield in the Egyptian Spring, a political uprising that in its first few days took the life of a promising Egyptian artist named Ahmed Basiony. In short order, sounds Kannenberg recorded in the spirit of John Cage’s 4’33” — to acknowledge the transient beauty in everyday sound — became a retroactive, somber memorial; a document of observational neutrality took on political force. Kannenberg had done nothing to alter the sounds he recorded, imposed no filters, added no instrumentation. History had done the work. The sounds of museum-goers’ footsteps became those of ghosts.

There are various sorts of history. Among them is the linear course of an individual artist’s career. Kannenberg’s has taken many shapes: musician, performer, recording artist, proprietor of the Stasisfield record label, curator, sound artist, visual artist, art student. Each new work of his joins the continuity of what preceded it; each new work alters our understanding of what occurred earlier. The Red and Black Land drawings become extensions of visuals he oversaw on Stasisfield productions. The sound installations expand on his early recorded material. And by actively occupying a museum for his latest work, he can be heard, himself, wrestling with its ghosts. More on the exhibit at hoursofinfinity.tumblr.com. More on Kannenberg at johnkannenberg.com. Above images drawn from his photos at flickr.com.