An unreleased 2000 EP from the trio Teledubgnosis 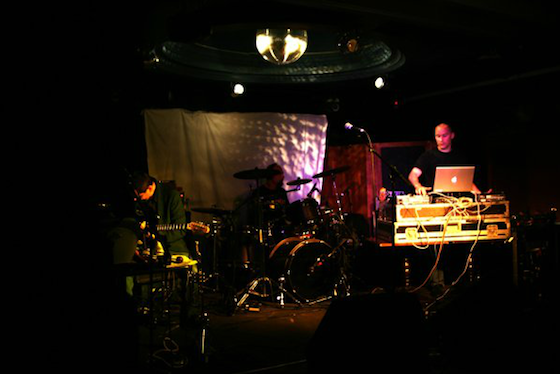 There is a new record due out from the rigorous metal trio Prong. On the surface, that release has little to do with ambient electronic music, but the continued development of Prong has had many overlaps with excursions into technologically enhanced music. The band’s leader, Tommy Victor, has played extensively with the industrial rock band Ministry. As for Prong, its most electrified recordings were, arguably, among its earliest, when the band still included its founding drummer, Ted Parsons, who has also played with Foetus, Bill Laswell, Swans, Godflesh, Jesu, and Killing Joke. Parsons now lives in Oslo, Norway, and he has over the years been part of another trio, Teledubgnosis, which teams him with Jason Wolford and Gregory Damien Grinnell. Wolford has recently been posting the Teledubgnosis catalog for streaming on his Soundcloud account. And he set one of them, apparently an unreleased EP dating from 2000, for free download. Folks who like the cut’n’paste aesthetic of early Ninja Tune, and the dub jazz of Grassy Knoll, just to note two points of referential orientation, will appreciate the dense, hip-hop”“associative tracks like “Ladies and Gentlemen” and “Sonic,” and the the deep echoes of “Superdub.”

It’s not entirely clear if Parsons performs on this album. The notes on the post read: “There is an interesting story behind this very dated and lofi gem. This one could’ve gone a totally different direction. Ask me about it sometime. But I like it as it is. It’s the little EP that could but never did. Guest vocals and trumpet by Regina Chellew, Norman Westberg and Kurt Wolf on guitar. David Wm. Sims on Bass. Heather Pauwe on violin. And the very much missed George Javori on percussion.”