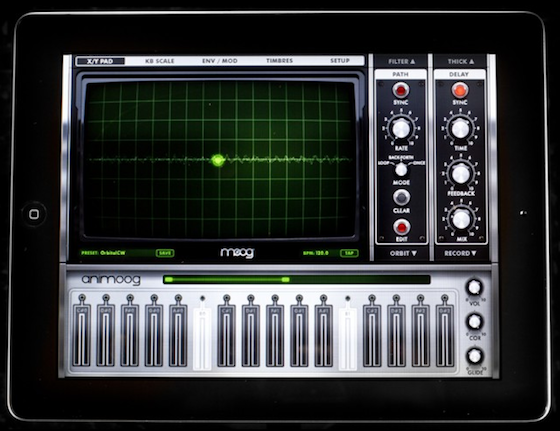 It’s like listening to a digital aquarium, not the lovely image suggested by such an idea, of hyperreal CGI aquatic life rendering in slow motion, but the aquarium itself, the machine of rhythmic pumping and cycling fluids that provides a foundation for life. This is one way of registering the track “Dubelectrons” by Savaran, who produced the piece as a mix of digital and analog, of iOS software (the Animoog, specifically) and everyday noise. It is less a song than a slice of activity, a roil of texture-as-rhythm, of electronic burbling as an end unto itself. As Savaran describes his process:

So I was messing about with Animoog on the iPad and thought I would combine some live noodling with some field recordings of household gadgets. The recordings used an induction coil pickup to capture the normally unheard electromagnetic signals in a Sony portable CD player, iPad, laptop and mobile phone. Animoog is probably the best synth app currently available and has a superb level of tactile control using the buchla style keys which allow a huge range of expression when combined with the modulation routing. Anyway, done in one take, warts and all – Dubelectrons”¦

Savaran is Wales-based musician Mark Walters, more on whom at twitter.com/savaran_music and savaranmusic.wordpress.com. Track originally posted for free download and streaming at soundcloud.com/savaran. Image above is of the Animoog iPad app interface (moogmusic.com).