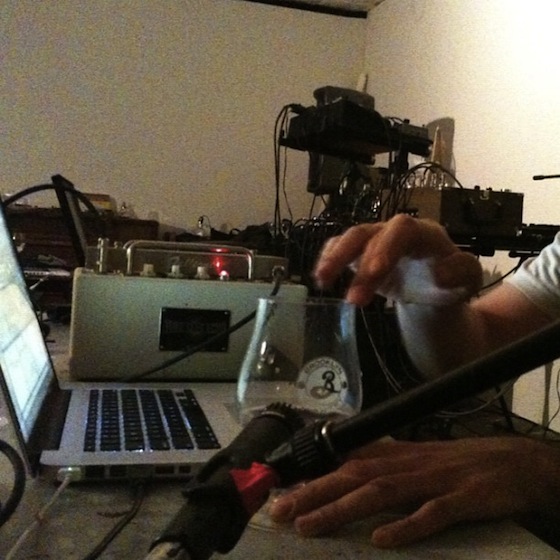 On Thursday, April 19, 2012, seven members of the Disquiet Junto and three of their guest accompanists played a concert of music for expanded glass harp at Enemy in Chicago. The concert was also available for live streaming at numbers.fm. It was the first group concert to develop out of the Junto project series. And what follows is audio (MP3) of the full evening. As the founder of the Disquiet, I am heard framing the evening at the opening, intermission (between Soliday and Monteverde), and end. I was visiting Chicago from San Francisco, where I live.

Dunn’s brief performance was an unplanned, and welcome, closing to the evening. Throughout the concert, he watched over the broadcast. The instructions to the other performers were to do two pieces: one of “expanded glass harmonica” and the other a work-in-progress they wanted to share with their fellow musicians and the audience. There are some extended silences and glitches/artifacts in the audio.

Dunn’s playing wasn’t the only surprise. Esposito had driven in from Indiana, and the crew that was the largest, Schoster’s, drove the furthest: from Milwaukee. Thankfully expanding the range of the performances, Tank read a poem through Schoster’s work. It closed with this memorable stanza:

The evening was just tremendous. The Enemy venue, in a large third-floor space in Wicker Park, has great sound, and the audience was attentive — barely anyone spoke at all during the performances. Despite the fact that everyone performing was from Chicago (or driving distance), no one who performed knew everyone who was performing. For example Soliday, who manages the Enemy space, only knew one of the performers in advance of the evening. The glass harp was selected as the subject of the evening because, as I note in my spoken introduction, it was an important piece of the Disquiet Junto series. The glass harp project was the third Junto project, and its intent was to make clear to participants that the Junto wasn’t just a sample-of-the-week endeavor; instead, it required that participants perform live. Thus, what better subject for the first large-scale Junto concert (I use the phrase “large scale” to distinguish the Chicago show from the times when members of the Junto have performed some of their project material live in other settings).

Someone seated on a couch at Enemy, Sei Jin Lee (twitter.com/sadlypanda), captured these five videos and posted them at youtube.com:

This is of my introductory comments:

These are of Karuna:

This is of Esposito and Soliday:

The audio track is hosted at archive.org.

Any additional, post-concert material will be posted here:

”¢ Shanley/Cinchel wrote about his concert experience at his cinchel.com site. He really gets into the spirit of the Junto, which involves talking about musical process as an interative process:

I also have really worked hard these past few months on live sets that a simple and focused. I’ve also now spent well over a year working in the same tuning (DGdgbe low-high) and the past month with the partial capo. its a tuning that seems to lend it self to drone really well. aslo i have spent a lot of time thinking about layers of frequency and focusing on that to really expand the guitar. pitch shifting with the whammy or in abelton to reach registers that the guitar normally doesnt hit. i see/hear a lot of guitar based drone/ambient and i really want to try and carve out a new sound or a fuller sound like mike shiflet or david daniell.

”¢ Monteverde/XYZR_KX wrote at his jonmonteverde.com site, where, among other things, he contrasted his Enemy performance with his earlier glass-harp contribution to the Junto project:

I was emboldened to create sounds by tapping various parts of the glass and the contact mic itself. The latter method produced low thumps that sounded very much like a kick drum, and the piece overall became much more percussive.

The photo at the top of this post is from Shanley/Cinchel’s set and was taken by by Cole Piece (instagr.am). That large box just behind the laptop is a tape delay. And the glass is, indeed, from Brooklyn Brewery. The image counts as a mid-concert update, in that Pierce tweeted it during Cinchel’s set.