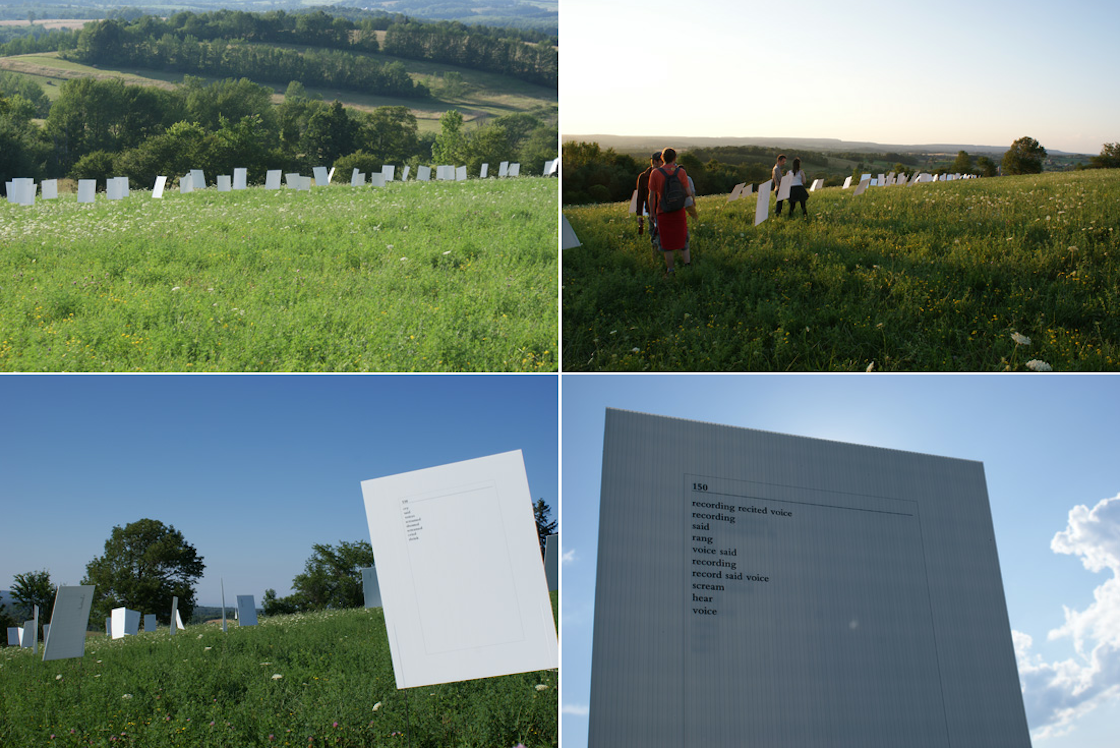 The Canadian art journal No More Potlucks asked me to interview Christof Mignone about his piece “The Rise and Fall of the Sounds and Silences from Mars.” The project is an act of sonic forensics applied to Ray Bradbury’s classic science fiction novel The Martian Chronicles. Migone’s work is as much an act of sound poetry as of sound art. Each page of the original Bradbury book was culled for only those words that represent sound, and then only those words were reprinted, page by page, in a series of columns. The piece has taken several forms — as a book published by Parasitic Ventures and as an outdoor installation at the Electric Eclectics festival. The latter is show above.

The full interview is online at nomorepotlucks.org. I’ll post it here after it’s been up there for a little while. Here in the meanwhile is an excerpt, focused on his decision making about what words made the cut:

Weidenbaum: There are two questions I want to ask at this juncture. The first is: When did you decide to include the word ”˜said’, which seems like it would significantly increase the ratio of words?

Migone: It came late. Basically, there was a second round of going back into the book and looking at what I had culled from it and making sure I hadn’t made any mistakes. While the word ”˜said’ clearly denotes dialogue, I initially feared that it would overwhelm my project; be too present. But I came to the decision of including ”˜said’ during the second stage because it became obvious that it would have otherwise been a glaring omission. I had several categories in terms of selection. It could be words in a scene where sound is very clearly being engaged by the author, or words that could allude to sound but weren’t necessarily intended that way in that particular place in that book. I also wanted to up the number of words selected, and since I was already abstracting the words into a different arrangement, it seemed fitting to the project to include any words that in and of themselves had sound properties. But obviously I didn’t add any words.

Weidenbaum: And that would have been the second question: Do you include words that suggest sound but that don’t specifically mean it? Like, if someone says: “I can hear the sounds”that includes two words – ”˜hear’ and ”˜sounds’ ”“ and mean sound. But if someone says: “it sounds like you’re headed north not south”, that’s different.

Migone: Yes, in that second case, I would include that. I like the fact that obviously those words had more than one usage. Read the full piece at nomorepotlucks.org. More on Migone at christofmigone.com.