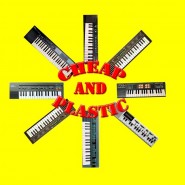 There is a tick tock, artificial wooden block metronome sound that is the telltale heart of a certain era of synthesizers — an era that some have come to call “tablehooters” and that are celebrated on the compilation album Cheap and Plastic, put together by Hal McGee as part of an open call. The project’s instructions (e.g., “Yes, you CAN use circuit bent keyboards”) are viewable at its facebook.com page, where the 36 contributors are listed. Among them is K.r. Seward, whose entry takes the tick tock as its central, part goofy, part maudlin compositional tenet. It plays like the theme song to a Saturday morning cartoon about vampire shut-ins and the mummies who love them. His instruments included two Casios, what he described as a Radio Shack rebranding of a Casio, and two Yamahas.

Track originally posted for free download at soundcloud.com/krseward. More on the compilation at facebook.com. More on Kevin R. Seward at audiokayness.blogspot.com.