The Cello in Service (MP3) 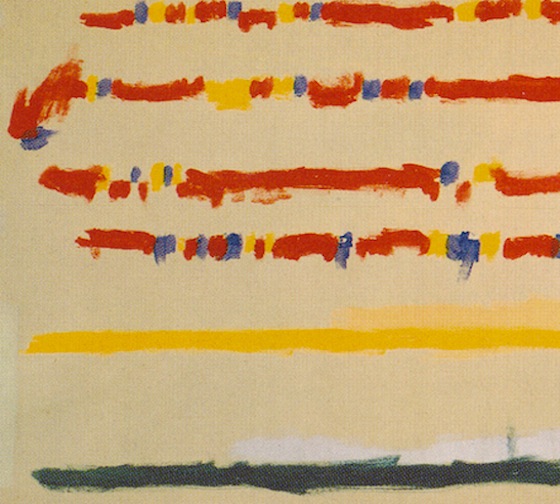 It’s a single cello, but heard numerous times, simultaneous instances of bow pulled slowly across strings, the combination of materials creating moirés patterns. It’s common enough for moirés to result from coincident elements, both in terms of the contrapuntal tendencies of percussion and the beading that results from sonically proximate yet meaningfully distant tones. When those materials are all drawn from the same instrument, there’s an additional layer of sonic illusion: it becomes geometrically difficult to trace exactly where one performance ends and another begins, because of the absence of the inherent textural nuances that would help the ear distinguish parts in, say, a cello quartet. This is the marvel of Anton Lukoszevieze‘s tribute to the late artist Fred Sandback (MP3), in which he interpreted the above painting as a musical composition. Explains Lukoszevieze of his approach: “The painting was used as a template for a musical score, which I performed several times on the cello, using different pitch material. This was overdubbed resulting in the piece.”

Track originally posted for free download at devinsarno.com/absenceofwax. More on Fred Sandback at fredsandbackarchive.org. More on the exhbit that inspired Lukoszevieze at kettlesyard.co.uk.

More on Lukoszevieze, who earlier this year was presented with the Royal Philharmonic Society’s award for outstanding contribution to Chamber Music and Song, at antonlukoszevieze.co.uk.