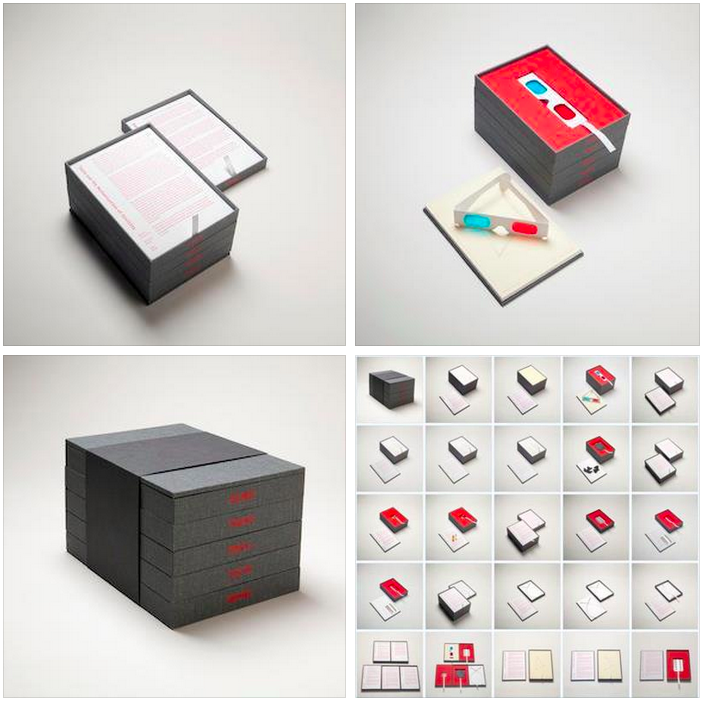 This coming Sunday in Berkeley, California, the Codex International Book Fair will open, and among the showcased works is Paolo Salvagione’s wunderkammer One for Each, which he produced as the 2012 artist-in-residence at the San Francisco Center for the Book. A book-as-object, it contains five individual pieces, each in is own drawer and aligned with a different sense (hearing, taste, etc.). In the course of my ongoing series of collaborations with Salvagione, I wrote supporting texts, which were printed on letterpress and are contained within the One for Each box. I previewed the sonic-related essay (“Sound and the Tactile Ear”) here back in October of last year, when the work had its in-progress debut at the Center for the Book. I wrote a sixth document in advance of Sunday’s debut of the finished work; this new document contains a series of three brief descriptions of the scents employed in the smell-related drawer of Salvagione’s One for Each. Below are images of the PDF rendering of the document, which is being printed in advance of the show: 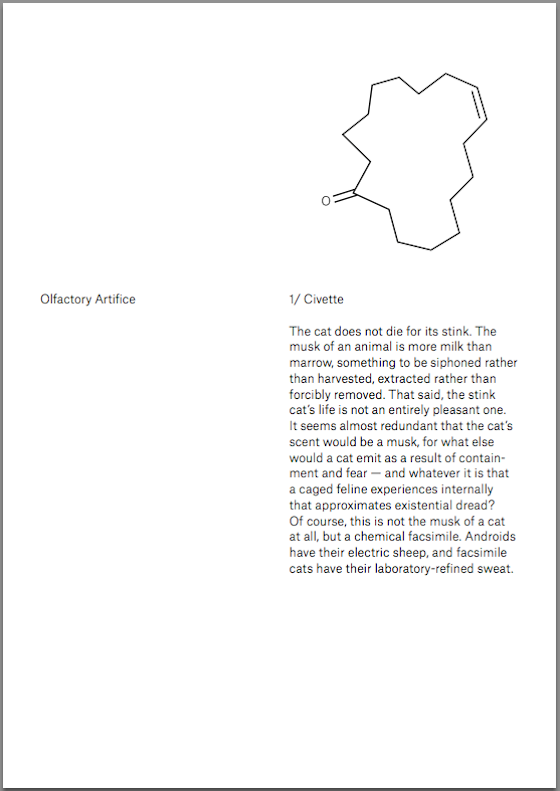 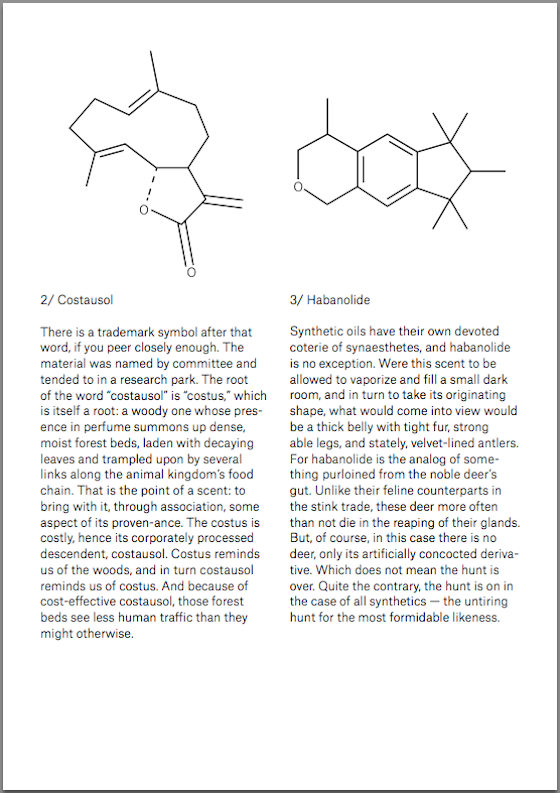 And here is the text of my scent-related essay from One for Each:

“Smell and the Threat of Action”

Can liquids be thought of as sleeping soundly — or do they lie in wait?

These tidy vials contain especially intense odors — they hold in a liquid state things generally thought of as vapors. They are condensed odors awaiting the enlivening act of dispersal. They are unassuming trinkets — trinkets loaded with potential energy.

The liquids are bottled here in small glass containers, elegant objects whose refined contours, whose economical dimensions, whose almost entirely transparent presence, belie what they are capable of. Only a tiny cotton ball keeps them from virtual invisibility, and its inherently cloud-like appearance suggests it as an illustration of vapor itself. Dropped on the floor, any one of them could clear a packed room in a matter of seconds. They’re a glass menagerie of disruptive action.

Take a whiff. What are those smells, what have they in common? It’s musk. In other circumstances, the collective odors might even be said to reek. Musk is, of course, the smell of exertion, of anxiety, of sweat, of fear — of exhilaration.

That word, “musk,”isn’t so unlike the vials themselves; it’s a familiar enough term whose common usage serves to mask its more salacious provenance. What is culture but an opportunity for humankind to subsume its animal nature in everyday normalcy, routine, in ritual, in language? The word “musk”is said to derive from the Sanskrit for “scrotum.”

If there’s a tension at work, it’s the anxiety intentionally inherent in the clinical presentation. A Wunderkammer, a cabinet of curiosities, presents itself as a collection of wonders. But if wonder is understood to be a form of power, then in some way that power must strain in captivity. The tension at work here is the gap between exertion and containment, between the acts these smells suggest and the tidy nature of their display.

Do these odors, seemingly sedate in their liquid state, so refined in their small glass enclosures, sleep soundly — or do they plot escape? Why not open a bottle and come to your own conclusion?

Here, for some referential reading, is a transcription of Brian Eno’s 1992 essay “Scents and Sensibility,” in which the ambient pioneer discusses his interest in sound. It is, per chance, part of this week’s reading assignment for the course on sound that I teach at the Academy of Art in San Francisco.

The design of the above card is by Boon Design (boondesign.com). More on the Codex event, which runs from Sunday, February 10, through Wednesday, February 13, at sfcb.org and codexfoundation.org. More on One for Each at salvagione.com.