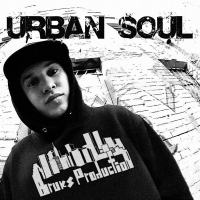 William Gibson’s oft-quoted maxim “The future is already here — it’s just not very evenly distributed”is an Internet-age corollary to perhaps the most cited line by William Faulkner, Gibson’s fellow novelist born in the American south. The Faulkner line: “The past is never dead. It’s not even past.” Both statements come to mind regularly when something from the great netlabel Dusted Wax Kingdom is spinning. Dusted Wax regularly posts music from the former Soviet Union, and related countries, that sounds like it was recorded in the Bronx shortly after the fall of the Berlin wall. The majority of Dusted Wax’s music is instrumental hip-hop, voiceless lines of artfully shambling beats. The beats may benefit from digital tools, but they bear all the marks of oldest-school hip-hop: vinyl surface noise, lightly reconfigured samples, a menacingly sedate pace. Among the latest from Dusted Wax is Urban Soul from “Russian beatsmith” Bruks Production, based out of Moscow. Among its key tracks is “Latin Thugs,” its brief horn sample echoed above slow rolling percussion (MP3):