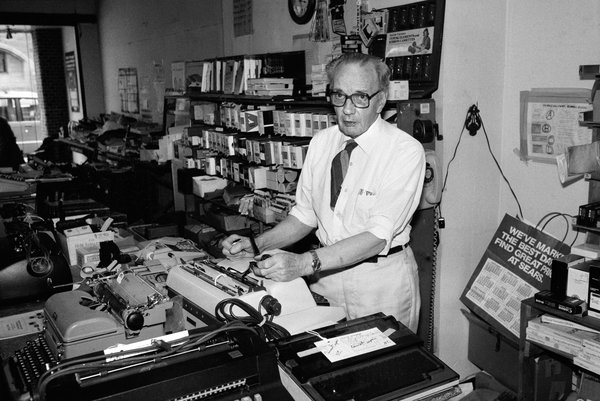 Three striking depictions of sound that I’ve come upon in the course of reading things not directly concerned with sound:

“The gentle hum of the traffic made a pleasant accompaniment to their conversation, as the holding down of a soft pedal fills in and supports dreamy organ music.”

That’s from early on in The Pit-Prop Syndicate, a crime novel by Freeman Wills Crofts. I’m reading it right now. The book was originally published in 1922.

“For eight decades, Manson Whitlock kept the 20th century’s ambient music going: the ffft of the roller, the ding of the bell, the decisive zhoop … bang of the carriage return, the companionable clack of the keys.

“From the early 1930s until shortly before his death last month at 96, Mr. Whitlock, at his shop in New Haven, cared for the instruments, acoustic and electric, on which that music was played.”

Those are the first two paragraphs of Margalit Fox’s obituary for a typewriter repairman, published in today’s New York Times, where the above photo, by David LaBianca, was published.

“After his landlord left he picked up the phone. The dial tone was the sound of vast distances across oceans and continents. Then it stopped, interrupted by much closer breathing on the other line.”

That is from my friend and former workmate Alvin Lu’s “Early Spring,” an excerpt from a pair of novels in progress, published in the debut issue of Your Impossible Voice, a new literary journal. More at yourimpossiblevoice.com and Lu’s city-god.tumblr.com. Lu can be heard reading it at soundcloud.com/your-impossible-voice.