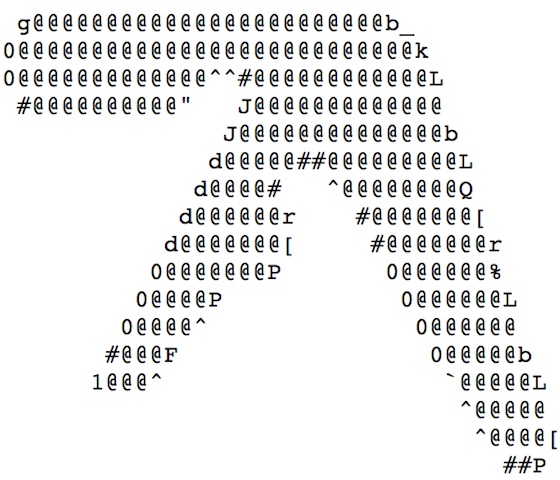 With the Aphex Twin Selected Ambient Works Volume II book’s writing behind me, the book’s release as part of the great 33 1/3 series is now itself a project. I’m sleuthing about for interested parties who might appreciate an advance galley — I think “influential readers” is the term the publicist employed — as well as for speaking opportunities. When I first started the writing of the manuscript, I thought I would be posting updates on Disquiet.com regularly about the process, but it turned out to be a far more insular exercise than I had expected — not that the book contains only my voice. No, I interviewed a heap of people for the book, and I also drew from interviews I did way back in the mid-1990s with Richard D. James and his fellow Cornwall native, Luke Vibert. In any case, a lot of ephemera surfaced during the research, and I’ll probably share bits of it as the February 13, 2014, date nears. Here are two ASCII depictions of the Aphex Twin logo, which appears on the cover of Selected Ambient Works Volume II, among numerous other Aphex endeavors. Up top is one that accompanied a long-running Aphex Twin FAQ, and here below is the signature file for Alan Parry, as it appeared on the IDM email list that was housed at hyperreal.org. Parry maintained both an Aphex Twin FAQ and a detailed discography. The IDM list began just a year before the Aphex Twin album was released. Next year marks the 20th anniversary of Selected Ambient Works Volume II, and this year, 2013, marks the 20th anniversary of the Mosaic browser, which for all intents and purposes made the World Wide Web easily and publicly accessible, although at the time only a small percentage of the public was taking advantage of it, among them university students with a keen interest not just in computers but in music made with computers and other electronics.

The book is pre-order-able at amazon.com, which seems like a kind of science fiction since it’s still in early stages of copyediting.