The latest Disquiet Junto finds music hidden in everyday books. The project began Thursday evening, November 7, and ends this coming Monday, November 11, at 11:59pm. It ends not at midnight but at 11:59pm, as do all Junto projects, because early on in the Junto series it became clear to me that when you type “midnight Monday” sometimes people don’t know if you meant the midnight that began Monday or the midnight that ended Monday. These sorts of distinctions are important, because the framing structure of the Junto is as much a set of rules as are the rules of a given project.

If there were two key rules about writing rules they would probably be:

Each of the weekly projects has its own vibe, its own likely/intended audience of participants, and its own surprises, and when it comes to surprises — especially in the form of generous contributions of code from participants — this week is no exception. A few notes follow regarding this week’s project, which involves transforming into music 80 characters selected from page 99 a book selected by the musician. The page number, 99, was selected from a comment by the author Ford Madox Ford (more details at the project page).

1: Shortly after project’s announcement, I got a note from Junto member David Wilkins, who has done text->music work in the past. He directed me to his website wilkinsworks.net, from which this is excerpted:

The earliest known version of this system appeared in the Renaissance as a technique called soggetto cavato, first used by Josquin des Prez around 1500, and later named by Zarlino in his 1558 treatise Le institutioni harmoniche as soggetto cavato dalle vocali di queste parole, or literally, a subject ‘carved out of the vowels from these words.’ des Prez only used the vowels, mapping them to the solmization syllables, and using the resulting notes as the cantus firmus for the Missa Hercules dux Ferrariae and other works. …

My first foray into this idea occurred in 1976 while an undergrad music student, waiting for a recital to begin. There is a famous organ work by Bach, based on his own name, which gave me the idea in the first place. In German, B is B flat and H is B natural. Being an American I wanted to use the A through G as is, so had to start with H as something else. Being a trombonist I tend to favor flats over sharps, so assigned H to A flat, I to B flat, and up to the first twelve notes. Start over again with M assigned to A, and so on for the remaining letters.

2: Junto participant Mutagene posted to github.com a script in the Ruby language to help automate the process of changing letters and punctuation into notes:

3: And Junto member Defaoieclan wrote a piece of software in Processing that would likewise assist in the transform. Full piece at the track’s page. Here’s the opening part:

4: And Junto member Inlet wrote something in Supercollider, available at the track’s page. Here’s the opening part: 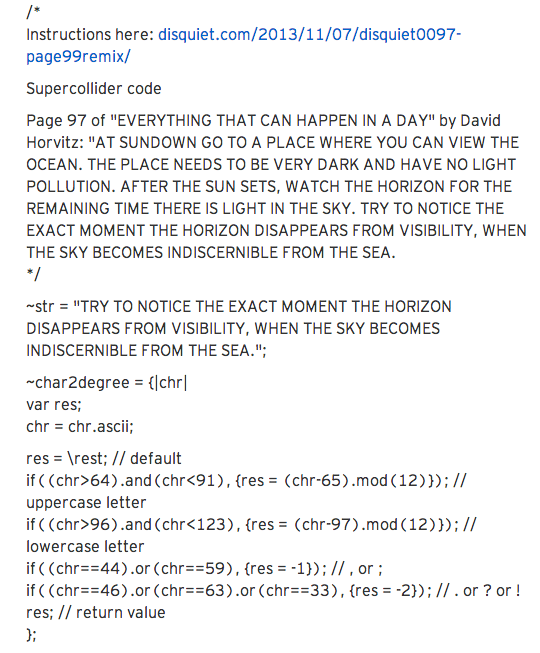