A friend suggested that I begin posting a regular peek into this site’s archives, so I am going to experiment with a “This Week [X Number of] Years Ago” project. There are no posts from December 1993, so I can’t do 20 years ago this week. I do, that said, have some print archives to port/upload in the future. 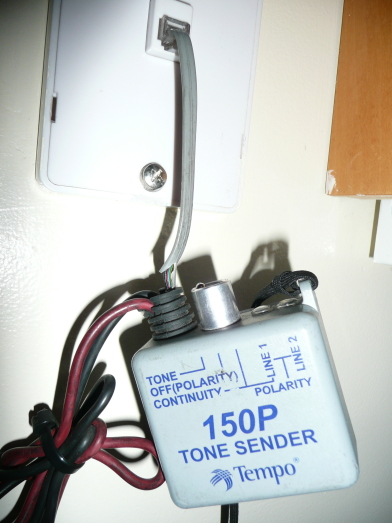 5 Years Ago (2008): In those pre-Instagram (b. 2010) days, I was posting an occasional “Image of the Week,” in this case the Tone Sender used by an AT&T service person who had come by the house I had recently moved into, in order to check the line. This was in the home I had just moved into a few weeks earlier, and where I still live. … I left for a Japan trip the Friday of that week, which is why (a few weeks later) I posted about an early Korg mobile software project. … I was also doing a “Quote of the Week” back then, and this one was of a scene in the under-appreciated TV show Leverage about ID’ing munitions by their sound. … Oh, and that week I upgraded to WordPress 2.7. Just this week, in 2013, I upgraded to WordPress 3.8. … In the Downstream department, there was music and by Fold, Giuseppe Ielasi, Pascal Wyse, and Celer’s Will Long and Danielle Baquet-Long (the latter of whom would pass away the following year). The Celer recording was of sounds outside George Orwell’s home. There was also a track by Merleon Cedraeon made with the Nintendo DS audiogame cartridge Electroplankton. On that Japan trip I purchased in Akihabara either the Korg cartridge mentioned above or the Electroplankton, or both.

10 Years Ago (2003): Easily the most prominent item this week a decade ago was an interview with the composer of the music for the film Les Triplettes de Belleville, BenoÃ®t Charest; the score featured, among other things, music from the sounds of vacuum cleaners. Charest’s score would be nominated for an Academy Award, and he would perform on the Oscars telecast. He’s recorded on average one score a year since then. … The Downstream department of this site was still a fairly new thing on Disquiet.com a decade ago. I had only months earlier moved back to San Francisco after four years in New Orleans, and the Downstream was still including streaming music, though it would soon come to focus solely on legally freely downloadable music, out of my interest in what had come to be known as the Creative Commons (founded 2001). This week’s entries included music from Addisko, Pocka, Steve Roach, Amon Tobin, Underworld, and 400 Lonely Things. Many of those offsite links have, inevitably, since expired.

15 Years Ago (1998): The only piece this week was a short review of the excellent album Signal Series by Chessie. Interestingly, several sources list this as having come out in 1996. Maybe I have the date stamp incorrect for the post. It would be quite excellent if my first attempt to dig into the archives yielded misinformation. Anyhow, Chessie makes music based on the sounds of trains. They’ve most recently released the 2008 album Manifest. When I reviewed this, I think Chessie was singular, just Stephen Gardner, but the Chessie website (chessiemusic.com) also lists Ben Bailes.