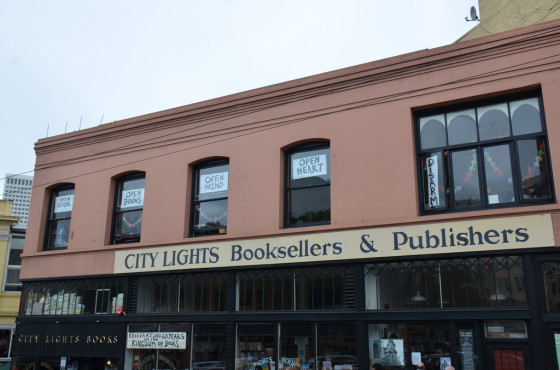 The first scheduled reading for my forthcoming book on Aphex Twin’s album Selected Ambient Works Volume II for the 33 1/3 series will be at the storied City Lights bookstore in San Francisco’s North Beach neighborhood. Several musicians will be joining me for this event. More details on them as the date nears. It’s scheduled for 7:00pm. on March 20, 2014. City Lights Bookstore is located at 261 Columbus Avenue. Here’s the description of the event from the citylights.com website:

Marc Weidenbaum is the author of a new book on the British electronic musician Aphex Twin’s landmark 1994 album, Selected Ambient Works Volume II. The book was published this February, 2014, on the album’s 20th anniversary by the estimable 33 1/3 series. In addition to reading from the book and taking questions about his research and writing, Weidenbaum has invited several musicians to City Lights to perform explorations of themes — not melodies so much as ideas — from the Aphex Twin album.

Extravagantly opaque, willfully vaporous — Aphex Twin’s Selected Ambient Works Volume II, released by the estimable British label Warp Records in 1994, rejuvenated ambient music for the Internet Age that was just dawning. Faithful to Brian Eno’s definition of ambient music, Selected Ambient Works Volume II was intentionally functional: it furnished chill out rooms, the sanctuaries amid intense raves. Choreographers and film directors began to employ it to their own ends, and in the intervening decades this background music came to the fore, adapted by classical composers who reverse-engineer its fragile textures for performance on acoustic instruments. This book contends that despite a reputation for being beat-less, the album exudes percussive curiosity, providing a sonic metaphor for our technologically mediated era of countless synchronized nanosecond metronomes.

Marc Weidenbaum founded Disquiet.com, which is focused on the intersection of sound, art, and technology, in 1996. A former editor of Tower Records’ Pulse! magazine, he’s written for Nature, Boing Boing, and the website of The Atlantic. He’s commissioned compositions from such musicians as Scanner, Steve Roden, and Stephen Vitiello, and lectures on the role of sound in the media landscape. He lives in San Francisco.

Photo by Steve Rhodes via Creative Commons and flickr.com.