This would be roughly the week of January 20 through January 26. 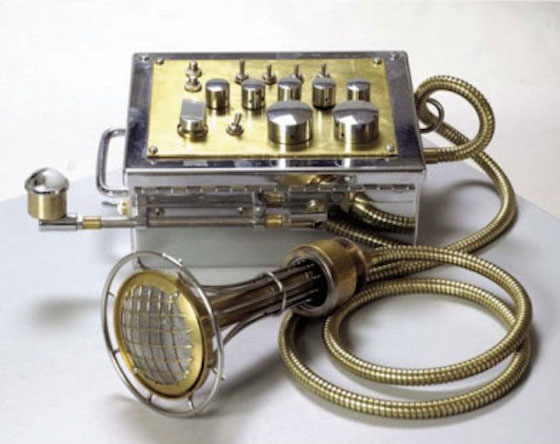 5 Years Ago (2009): The image of the week was a steampunk instrument by Mike Ford. … The quote of the week was the first two paragraphs of an essay by Eula Biss on the telephone (“The idea on which the telephone depended—that every home in the country could be connected with a vast network of wires suspend ed from poles set an average of one hundred feet apart—seemed far less likely than the idea that the human voice could be transmitted through a wire”). … Downstream recommended listening included Battlestar Galactica remixes, some proggy instrumental goodness from Marco Cervellin, mini film scores by O.S.T. (Chris Douglas), a skateboard documentary soundtrack by Odd Nosdam, and a live Amon Tobin performance.

10 Years Ago (2004): The quote of the week was a comment on Slate.com about the famous scream by Howard Dean on the 19th. … Downstream entries included Nanoloop tracks, music by Deadbeat (aka Scott Monteith), a mix by Luke Vibert (aka Wagon Christ), fourth-world trip-hop from Eivind Aarset, and material by Pocka (aka Brad Mitchell).

15 Years Ago (1999): A piece about Slow Gold II, an $89.95 piece of software that let you slow down music. … A review I wrote for Amazon.com of Michael Nyman’s score to The Piano (this is back when Amazon was hiring music journalists to write featured reviews — not consumer reviews, official Amazon reviews — of albums that it sold).