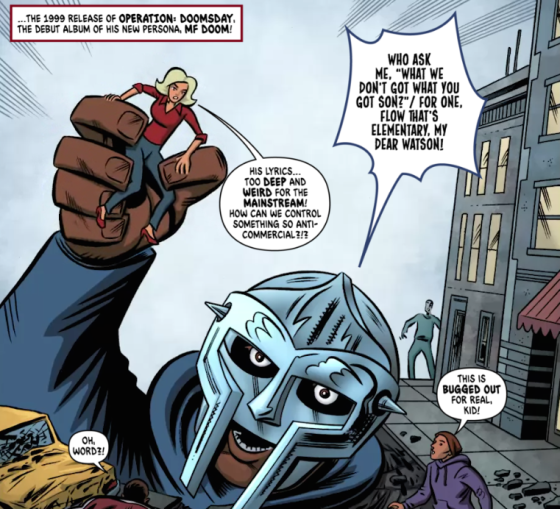 I initiated and have been editing a series of three-page comics and manga for Red Bull Music Academy to coincide with its Toyko festival, which is underway right now. The first in the Red Bull Music Academy series tells the story of “The Rise of MF Doom” (detail above) through the lens of classic comics like, naturally, The Fantastic Four, with art by Dean Haspiel (Billy Dogma, The Fox, Batman) and a script by Gabe Soria (Batman ’66, and Life Sucks with Jessica Abel), supported by Allen Passalaqua on colors and Vito Delsante on lettering. 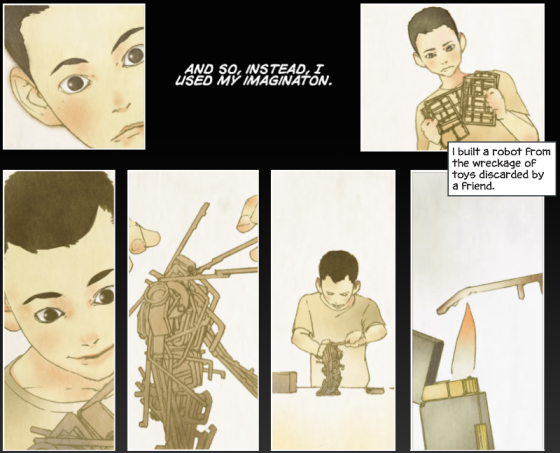 The second RBMA piece (detail above), created by manga-ka (or manga creator) Haruhisa Nakata (“The Tree of Maüreca,”Levius) focuses on one of my favorite Japanese musicians, DJ Krush. The story takes Krush’s early childhood habit of making new toys out of spare parts and connects it to his making music from pre-existing recordings. Titled “Building It,” the manga is based on an interview that Krush did specifically for the RBMA series. I co-edited the Krush manga with Hideki Egami, who was long the editor of the excellent manga magazine Ikki, known for such series as Daisuke Igarashi’s Children of the Sea, Iou Kuroda’s Sexy Voice and Robo (I wrote an essay that appears in the English edition of the manga), and TaiyÅ Matsumoto’s No. 5 and Sunny. Egami generously accepted my invitation to help on the Japanese side of this international project. All the RBMA comics are appearing online in English and Japanese, and each features light elements of animation. The crew has coalesced in a great way, with Nakata taking the time to assist by lettering in Japanese some of the English-language comics, and Delsante assisting on some of the English versions of the manga.

For background, I edited the comics in the music magazine Pulse!, published by Tower Records, from 1992 to 2002, and later worked for half a decade at Viz, the U.S.-based publisher of manga in translation, and it’s been great to bring those experiences together. At Viz I worked with folks like Jessica Abel, Ed Brubaker, Barry McGee, and Adrian Tomine early in their careers, and with folks like Dan DeCarlo, Justin Green, Peter Kuper, and P. Craig Russell further along in theirs. Full index of the Pulse! comics here.