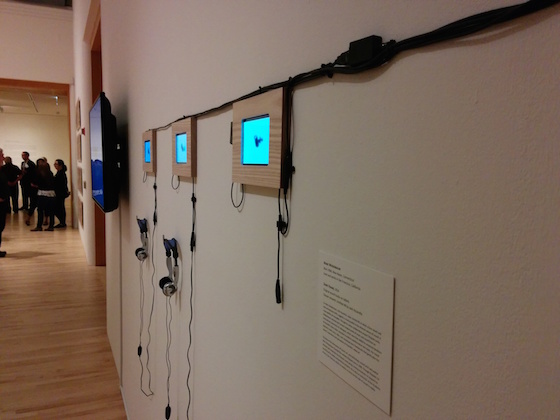 Since October 2 I’ve had a sound installation at the San Jose Museum of Art. Titled “Sonic Frame” it will, through February 22, 2015, be on display at the museum as part an expansive 45th-anniversary exhibit titled Momentum: An Experiment in the Unexpected. I was invited to be one of the museum’s “intervenors.” Other intervenors include comics artist Lark Pien, San Francisco Ballet principal dancer Damian Smith, and poet David Perez. Our role as intervenors was to create new, original works that responded to works that are part of the museum’s permanent collection. I selected Josh Azzarella’s video “Untitled #8, 2004.” The video is two minutes and thirty one seconds long, and shows a shape slowly morphing against a light blue background. My response takes the form of three small screens on which the video loops repeatedly. Each screen contains a unique set of seven different audio tracks composed to complement it, so each time the video plays anew it is accompanied by different sounds. Two of the three screens have headphones attached, one has a directional speaker, and all three have jacks allowing the visitor to plug in their own earbuds or headphones. The variety of scores, 21 in all, influence the viewer’s experience of the video. Of the 21 scores, 14 were selected from tracks contributed to a project of the Disquiet Junto, the weekly music collective I moderate, and 7 were contributed as the result of a direct request by me to the musician.

This is the wall text that accompanies the piece:

Sonic Frame, 2014 Original soundtracks on tablets Chosen artwork: Untitled #8 (2004) by Josh Azzarella For Marc Weidenbaum, Josh Azzarella’s video Untitled #8, in which a form slowly shifts, suggests a visual parallel to the ethereal nature of sound: perceptible yet intangible. Through his online collaborative project Disquiet Junto, Weidenbaum collected and curated original works of music and sound from an international community of colleagues, which he then added to unsynced iterations of Azzarella’s silent video. Intended to explore transformation and stasis, the sound elements create auras, halos, and contextual sonic frameworks that gently alter the viewer’s experience and perception of Azzarella’s video art.

Focusing on the intersection of sound, art, and technology, sound artist and author Marc Weidenbaum founded the website Disquiet.com in 1996. Through Disquiet, he initiated and moderates the Disquiet Junto group, inviting musicians to respond on SoundCloud to weekly compositional projects. Weidenbaum is also an instructor at the Academy of Art in San Francisco where he teaches a course on the role of sound in media.

In the development of Marc Weidenbaum’s Sonic Frame, almost eighty musicians from around the world contributed original recordings for potential inclusion. The majority of these recordings, seventy in all, were produced as part of a project in the weekly Disquiet Junto series. Each week the Disquiet Junto online community responds to a different compositional prompt. Another seven tracks were created by composers who Weidenbaum approached directly to participate in the piece. Some of these musicians had previously participated in Junto projects, and he wanted to ensure their involvement in this one. In the end twenty-one recordings were selected for inclusion, seven different ones for each of the three frames.

These are the participating composers, broken down screen by screen:

Here are some images of the installed work. My “Sonic Frame” hangs directly to the right of a large, 50″-screen display of Azzarella’s original video: 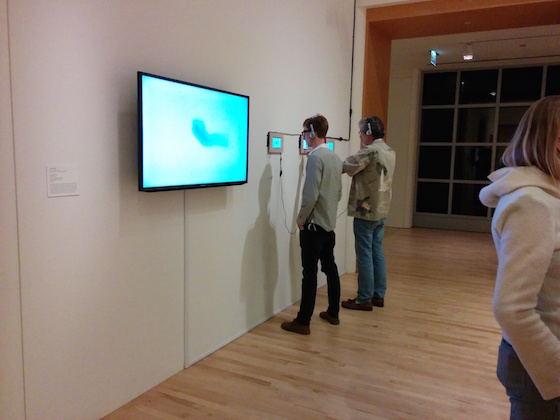 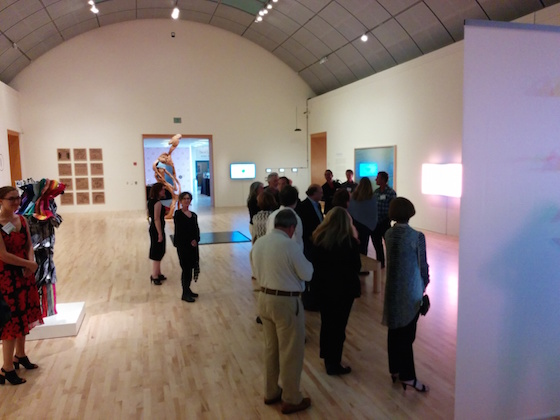 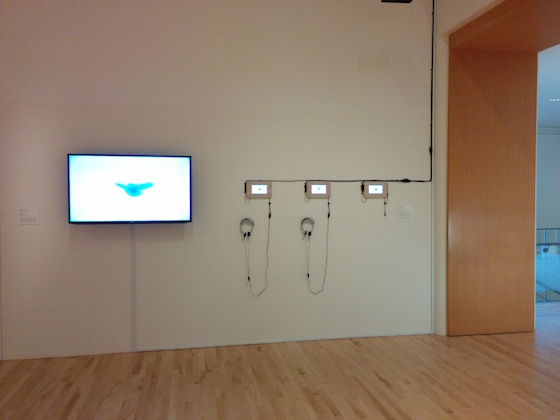 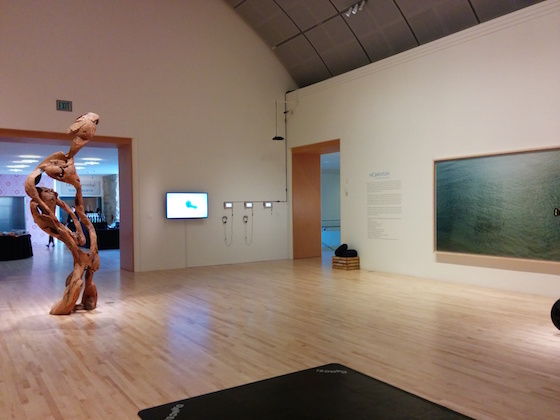 And here are shots of the overall exhibit information, as displayed on walls at the museum: 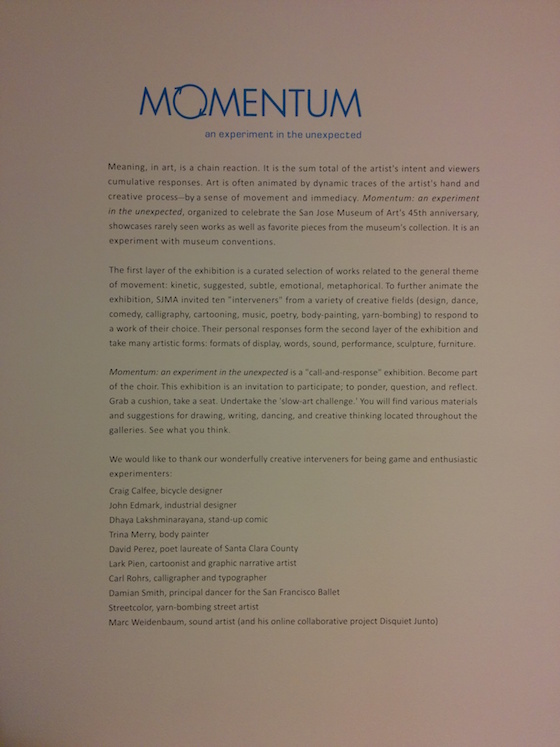 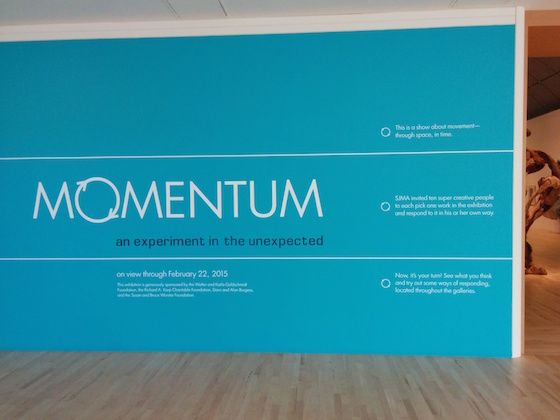 The museum has asked that I don’t post the combination of video and sound online, so that the work is unique to the exhibit, and I want to respect that request. Here is a set of all the tracks resulting from the Junto project:

And here is the original, silent video by Azzarella they were intended to accompany:

I received a lot of input and assistance in the development of the “Sonic Frame,” and in particular I want to thank Lauren Franklin for video editing, Paolo Salvagione for designing and producing the screen enclosures, Jonathan Odom for woodwork on the enclosures, and the staff at the San Jose Museum of Art for their support, advice, and attention.

Here are some images taken during the installation process: 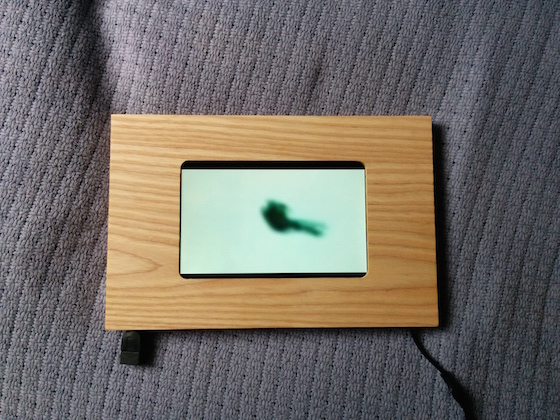 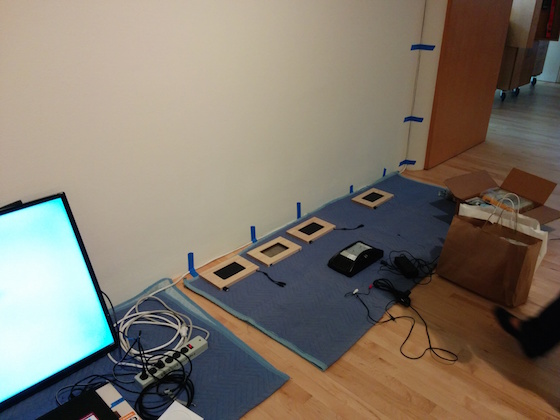 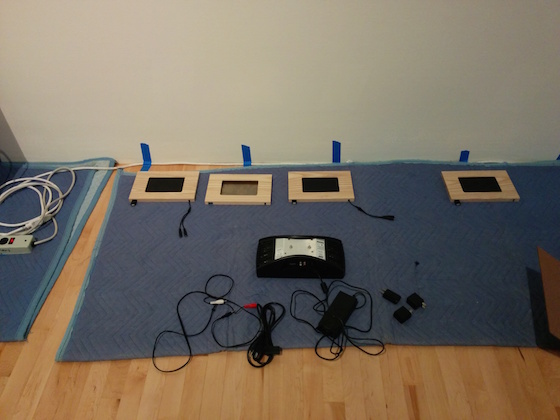 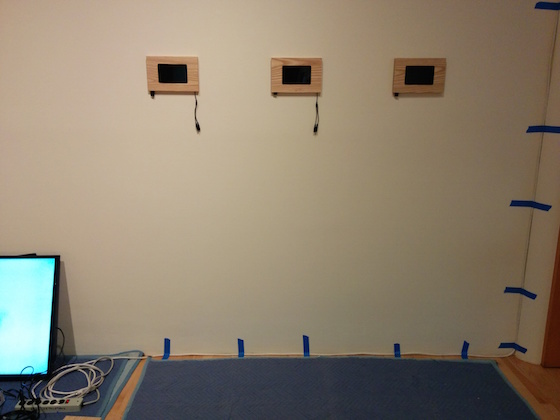 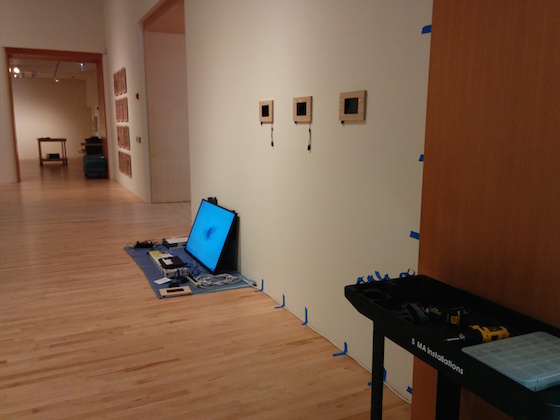 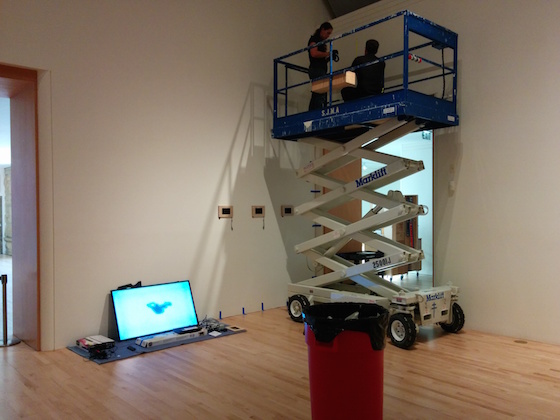 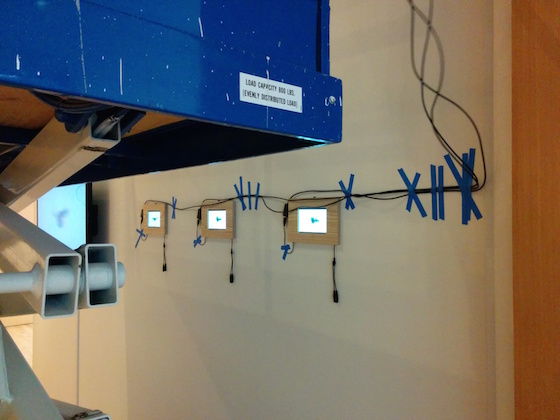 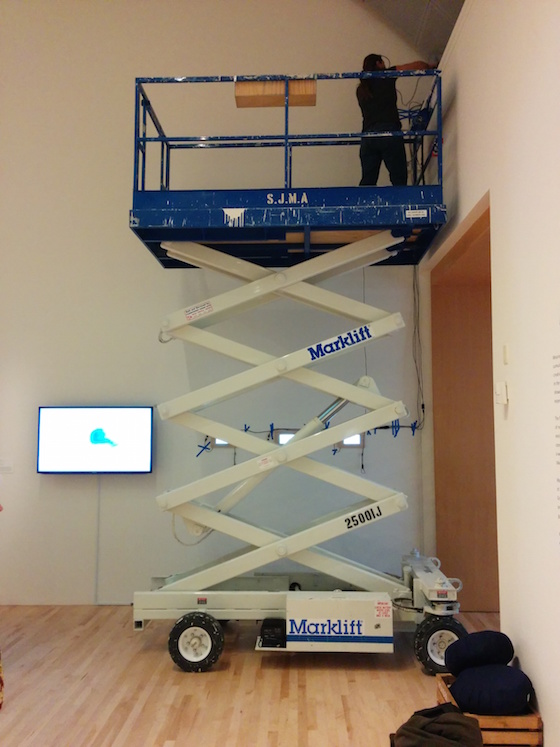 More on the exhibit at sjmusart.org.