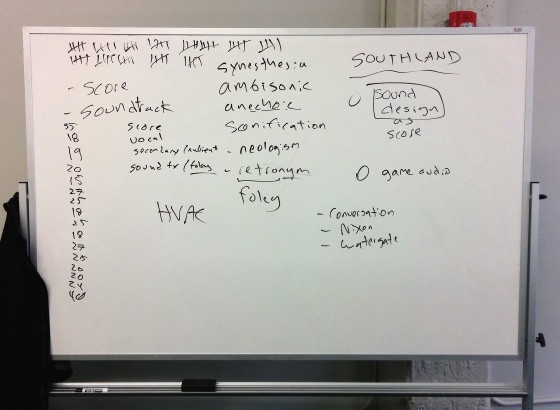 I’ll be teaching my course on “the role of sound in the media landscape” — aka “Sounds of Brands / Brands of Sounds” — again this coming spring 2016 at the Academy of Art here in San Francisco.

The semester runs from February 1, 2016, through May 21, 2016. The class meets on Wednesdays from noon to 2:50pm, which means the first class meeting is February 3 and the final class meeting will be on May 18. There’s no class on March 23, which is spring break, for which I’ll probably assign a close-listening analysis of Cliff Martinez’s work on the score to Spring Breakers. Just kidding. Well, maybe not kidding.

Last semester we had one of the heads of the Mutek festival (Patti Schmidt) address the class, as well as someone from the software developer Cycling ’74 and someone from Facebook’s virtual-reality team, among others. The previous semester we had someone from BitTorrent and someone from SoundCloud, and we took a field trip to an anechoic chamber at the local research lab of an audio company. The guest speakers aren’t generally lecturers; I usually interview them in front of the students, who also ask questions. The semester prior both the sound artist Robin Rimbaud (Scanner) and the voice actor Phil LaMarr (Samurai Jack, Static Shock) visited via Skype. 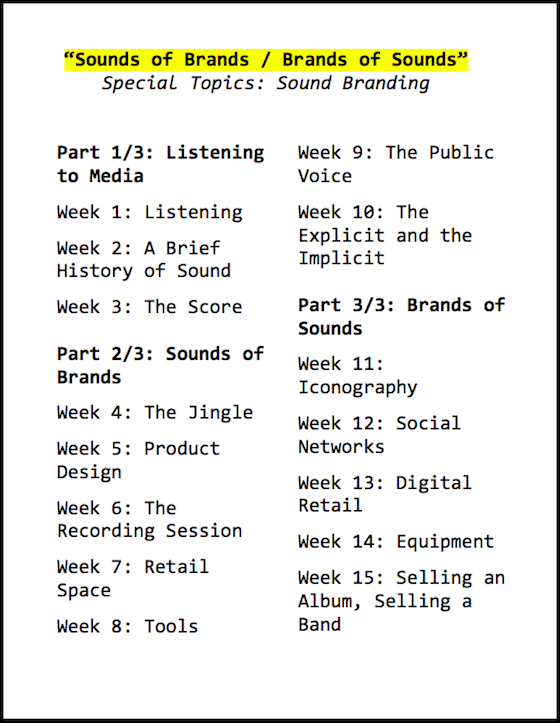 I teach the course to a mix of MFA and BA students. This is the seventh semester that I’ve taught the course, after taking off last semester with the intention of teaching it once a year rather than twice a year, to leave room for loads of other projects.

You can read summaries and documentation from past semesters using the “brands of sounds” and “sounds of brands” tags here at Disquiet.com.