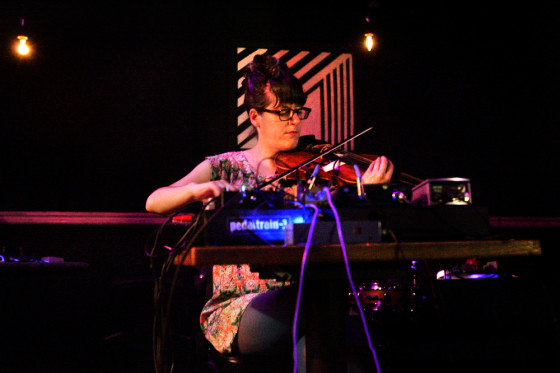 Liz Meredith’s violin is so deeply buried in the glorious noise of this live recording, from July of last year, that the instrument is barely if ever recognizable. What is recognizable is an urge to take static and interference and loop them until they push at and against the ear’s penchant for pattern. There’s a sawing early on that could be the violin, or it could just as likely be a saw wave. For just over 10 minutes, she rages in slow motion, at one moment suggesting a fourth-world raga, at another a sonar beacon. The performance was taped at the Windup Space in Baltimore, Maryland, where Meredith lives.

On the gentler, if still at times nervous-making, end of the continuum, also recommended is this 2013 collaboration between Meredith and John Somers, The Disposition of Vibrant Forms, a collection of wonderful longform drones, ranging in length from nearly 12 to over 20 minutes:

Live track originally posted at soundcloud.com/liz-meredith. Disposition album at thedispositionofvibrantforms.bandcamp. More from Meredith at lizmeredith.com, where the above photo originated.