Horse Bests Other Horse: News came this week that old music outsold new music for the first time in recorded history — or, in this case, recorded recorded history. Adam Puglsey lays out the situation at chartattack.com. Of course, as he also writes: “Keep in mind that these stats don’t include album streams, but regardless, it’s a significant turning point.”Which is to say, this may be like saying one breed of horse outsold another breed of horse for the first time after the introduction of the automobile.

The History of the Phone Is the Future of the Phone: Speaking of ahistoricism and technology, at medium.com, Peter Rojas talks about a new phone service called Unmute. It’s an app for conducting phone calls, with one added feature: “anyone can listen in on the calls. In fact, having a conversation in public is the whole point of Unmute, which is why we find it so compelling as a product.”This future-tech platform is vaguely reminiscent of what was, before the advent of widespread individual-household phone service, called a party line. Older baby boomers and their parents can recall apartment buildings and rural regions alike having shared lines. Pick up the phone at the wrong — or, depending on your predilections, right — moment and you get not only an earful of local gossip, but you can participate, as well. More on Unmute, which unlike party lines will provide an MP3 at the end of the call, at onunmute.com.

The Tantalizing Promise of the Applbum: Apps have been the new albums — the “applbum,”perhaps — for awhile now, and though the hybrid isn’t exactly a fulfilled promise, it continues to bear fruit. Adrift, the blissful and expertly glacial generative ambient experience by Loscil (aka Scott Morgan), was released for iOS late last year, and in a (sadly) rare instance of platform equity it popped up this week in an Android version. Well, not directly Android. It’s not in the Google Play Android app store, but in Amazon’s app bazaar. I asked Loscil/Morgan why via Twitter, and he explained that the Android max size was 100 megabytes (“i can’t afford the dev cost of adding expansion packs”), while Amazon has no app-size cap. The size is due to the app’s expansive sonic content that yields its generative (i.e., ever-changing) listening experience. … Meanwhile, Massive Attack has released a new album ”¦ that is, app, titled Fantom, that is billed as a sensory experience. Presumably “sensory”implies “interactive,”since music is itself sensory and “interactive”is simply a term that may have outlived its utility before that utility had actually been realized. The thefantom.co site explains: “The remixes reflect your movement and balance, the time of day or night, your location and your surroundings as captured by your device’s camera.”At the moment the link to the iTunes store isn’t yielding the app, but Tom Fenwick at motherboard.vice.com has some in-depth coverage, including the fact that one of the developers is Rob Thomas. The article doesn’t mention this, but Thomas is the former Chief Creative Office of Reality Jockey, where he helped develop the app RJDJ, which used a unique “scenes”scenario to alter in real time the sounds your phone or iPod picked up. RJDJ led, in turn, to several other apps, including ones associated with Christopher Nolan films, such as Inception. More from Thomas himself at soundcloud.com/dizzybanjo.

Nanonews about Microtones: In 1958, Alain Danielou published Tableau Comparatif des Intervalles Musicaux, which to an outsider (whether or not they speak French) might look like a codebook out of The X-Files or the Conet Project. What it is is an encyclopedia of microtones — in Gann’s description, “of all even marginally significant intervals within an octave.”A keen-eyed correspondent of Gann’s recently noticed an error: “On the right-hand bottom corner of page 48, the interval listed as 569/512 should actually be 567/512, as 3 to the 4th power times 7 is, of course, 567.”Here is the evidence: 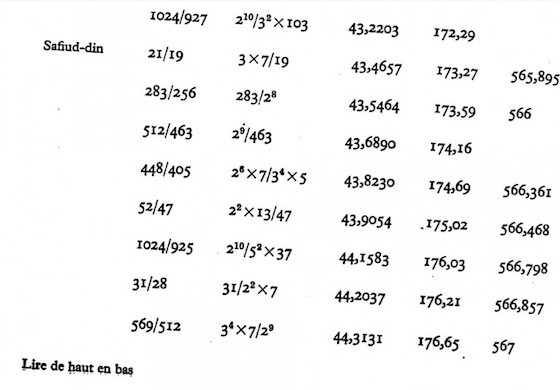 As mistakes in tonal esoterica go, Gann notes, this one actually has some currency: “this is one of the intervals used in The Well-Tuned Piano”(one of La Monte Young’s great works). Gann, whose long-ago Village Voice music criticism was essential reading for me and many others back in the day, blogs at artsjournal.com/postclassic, where this notice first appeared. His Danielou article includes a link to a complete PDF of the Tableau book.

This first appeared in the January 26, 2016, edition of the free Disquiet “This Week in Sound”email newsletter: tinyletter.com/disquiet.