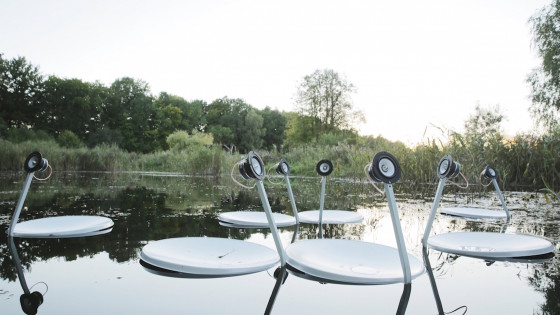 The Uncanny Lake: This whimsical image is of inverted satellite dishes (with added speakers) whose design and deployment are intended to refer back to the silhouette and motion of swans. The work is an outdoor installation by Berlin-based artist Marco Barotti. So often the exposed speaker is intended to be ignored in sound art. Kudos to Barotti for making something of the form. There’s video at creativeboom.com, which provides additional information: “Two layers of sound design consisting of bass frequencies and human breath passing through brass instruments provide them with voice and motion. Eight individual audio channels are used to transport the sound through the swans, bringing them to life and remodelling the landscape.” 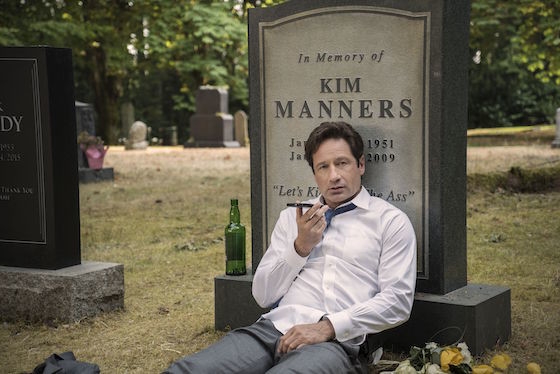 Cellphone Home: We’re now halfway through the reunion of The X-Files, and the third episode is, in my opinion, easily one of the best told and most enjoyably self-conscious episodes in the history of the show. This six-episode miniseries is clearly about the midlife crisis of Agent Mulder, whose long-held desire to believe has to, now, make due in the age of snopes.com. That scenario is a little disappointing because it leaves Agent Scully playing second fiddle, but Mulder’s self-doubt is more than enough to carry the show, and Scully makes a great foil for his crisis of xenobiological faith. This third episode, “Mulder and Scully Meet the Were-Monster,”casts two fine comedians, Rhys Darby (the band manager from Flight of the Conchords) and Kumail Nanjiani (one of the main programmers on Silicon Valley), in roles the least said about the better, except that the duo, along with Mulder, give Scully plenty of opportunity to marvel as the sheer ridiculousness of what life as an X-Files agent involves. Scully can get sanguine, even giggly, while Mulder seems maudlin. At one point he wakes up in a cemetery with a freshly minted hangover. His cellphone is ringing. It’s playing, of course, the theme music from The X-Files. How this meta-congruity fits into the mythology of the series is unclear, but what I really wants to know is if this ringtone is reserved only for Scully. There are three more episodes to go. Perhaps all will be revealed. What’s for sure is that the ringtone works well within the overarching self-awareness of the episode (which features Darby wearing the same hat and clothing as the hero of Kolchak: The Night Stalker, which was as much a premonition of The X-Files as The X-Files was of Fringe). The score-within-the-show cellphone moment is a reassuring reminder that, like Mulder himself is advised, the audience needs to take a deep breath and stop trying to connect the dots. At least until next week. 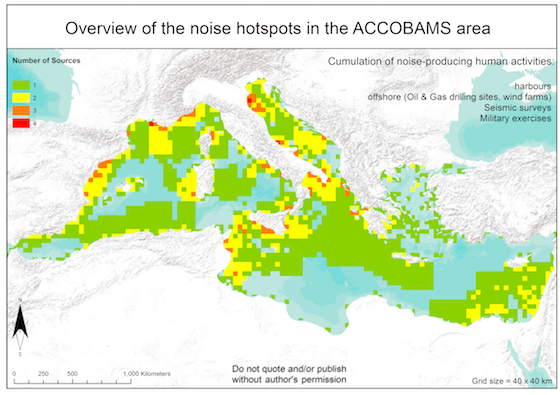 Basin Blues: That is a map of the Mediterranean. Despite the colors, it is not pretty. The colorful pixels are not recreational spots but locations of especially high noise density. Then again, maybe they are recreational spots as well. More importantly, the map is reportedly the first full map of “underwater noise sources” in the Mediterranean basin, the work of researchers in France, Italy, Switzerland, and the United States. The primary activity appears to be four sources: harbors, offshore activity (not just oil and gas drilling but also wind farms), seismic surveys, and military exercises. These closely map to cetacean habitats, hence the concern on the part of the researchers. The news was released as part of one of several oceancare.org campaigns to raise awareness. (Found via sonicstudies.org.) … In related news, the Telegraph reports that the noise of ocean-going ships may keep orca whales from communicating with each other.

Sonic Weapons: Via gizmodo.com, sometimes that man-made quake sensation isn’t from fracking down below, but from something on high: “Tremors felt by residents of New Jersey Shore and Long Island today prompted speculation that an earthquake had occurred—but the US Geological Survey confirmed that the rumbling sensations were caused by a sonic boom.” Measurements over at earthquake.usgs.gov.

This first appeared in the February 2, 2016, edition of the free Disquiet “This Week in Sound”email newsletter: tinyletter.com/disquiet.