3D Crimes: The hum of a refrigerator may not be enough to allow identification of its make and model, and the electric car may have let us to make our engines sound like something else entirely (see the SoundRacer), but more consequentially the rumblings of a 3D printer may contain sufficient detail for the someone “to reverse-engineer and re-create 3D printed objects based off of nothing more than a smartphone audio recording”: 3ders.org, via Barry Threw. 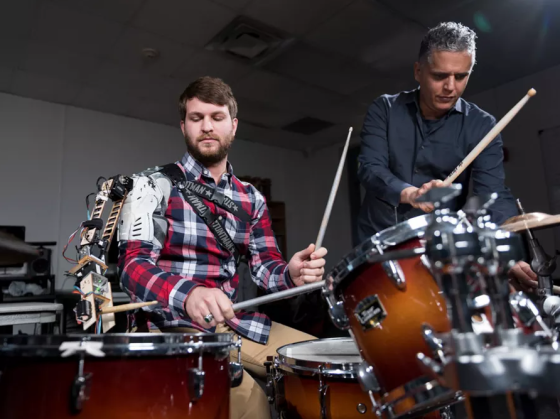 Posthuman Postrock: There is now a “wearable third arm” for drummers, which brings to mind both the opportunities for posthuman postrock, and the kit developed for Rick Allen of Def Leppard after he lost an arm in the mid-1980s. Above photo shows Tyler White accompanied by Gil Weinberg: gizmag.com, via twitter.com/showcaseJase.

[Heavy Breathing]: Last year, Sean Zdenek published Reading Sounds, a book about captions, about how the audio of filmed entertainment (dialog, diegetic sound like a passing car, and non-diegetic sound like a score) is represented with words superimposed on images. Now there’s a two-day “virtual conference” on captions (Caption Studies) scheduled for August 1 and 2 of this year. If you’re the sort of person, like me, who thrills to “[dramatic music]” and “[ninjas panting],” then I’ll see you there. Well, that is, we’ll be online simultaneously: captionstudies.wou.edu.

[email protected]#$ Patents: This sounded like an April Fools joke, but it appeared on Business Insider on March 31, and appears to be the case: Apple has technology that automatically removes the curse words from songs. Filed in 2014, the patent is titled “Management, Replacement and Removal of Explicit Lyrics during Audio Playback.” Keep in mind that two years prior to that, in 2012, the Apple Match service — which adds to your cloud the albums you already own, saving you the perceived hassle of ripping and uploading them — accidentally replaced people’s NSFW versions with the “clean” edits that play in fast-food restaurants and on cautious radio stations — via factmag.com, Scanner, and King Britt 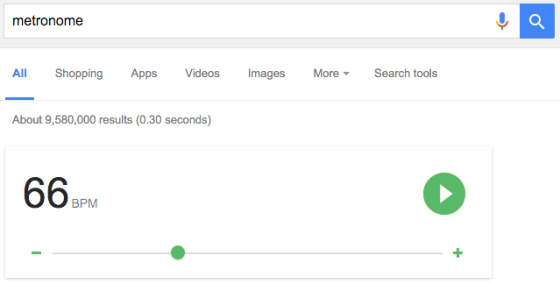 Google BPM: Well, Google the word “metronome” and you’ll be provided a functioning metronome that allows you to select an integer between 40 and 208 and hear what that click track sounds like: androidpolice.com.

iClassical Pro: Alan Pierson, of the adventurous chamber ensemble Alarm Will Sound, has uploaded to Medium an article first published two years ago on the group’s blog, but it’s new to me. It’s Pierson talking about how he moved from using paper scores to digital scores when conducting. His take: “And while conducting off tablet is safer in many ways, it’s almost certainly more prone to catastrophe on any particular gig than working off of paper scores: a PC crash is probably more likely than music falling off a stand or out of a binder and harder to recover from. But the plusses seem to far outweigh the minuses.” At least now Google can help with the BPM.

Ear on the Apocalypse: “Seismologists at the University of Alaska Fairbanks Alaska Volcano Network have developed a refined set of methods that allows them to detect and locate the airwaves generated by a volcanic explosion on distant seismic networks.” That is to say, scientists are listening for earthquakes: “This study shows how we can expand the use of seismic data by looking at the acoustic waves from volcanic explosions that are recorded on seismometers”: uaf.edu.

This first appeared, in slightly different form, in the April 5, 2016, edition of the free Disquiet “This Week in Sound”email newsletter: tinyletter.com/disquiet.