The digital signature of media failure 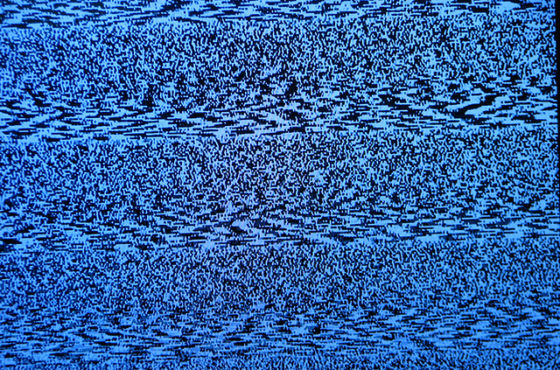 I started using an additional video streaming service. Its interface was just different enough from those of other streaming services that my brain had to adjust during the early stages of adoption. Even when watching a TV episode or a movie within a given service, there is a layer of service-specific interface design. It can take awhile for that layer to become mentally invisible, brand transparent, aesthetically neutral. The same can be said of its interference.

There is no truly blank canvas in digital media. One service shows a more granular level of stills during fast forward and reverse, while another does a better job of adjusting to your TV screen, and yet another seems more finicky than its competitors about just how low-rez it’ll consider displaying an image when, for whatever reason, the wifi is sluggish. If the wifi drops below that service’s effete threshold, it defaults to a signal-error screen, while all the other services seem happy to serve up a glitchy entertainment of blocky, vaguely familiar images that suggest Chuck Close trying to give Bill Viola a run for his installation money.

This new service had hit a slow spell, and the screen reverted to a melty image that brought to mind an overplayed VHS cassette, or more to the point the digital simulation of an overplayed VHS cassette on some contemporary retro drama set in the penultimate-lapsarian era of early Internet adoption. The audio held for awhile, so my brain knew who was talking. I began to wait out the low-fidelity spell like one might a snow storm or a case of indigestion. The TV snow of my youth came to mind, but this was something else entirely, a mutant hybrid, half-noise, half-signal.

And then the audio itself gave, the music and voices intermingling into some sludgy, broken stream of consciousness. The effect was familiar but distinct from the failures of other streaming services, which ran different technology on different hardware in different clusters of geolocated farms of different servers. This glitch sounded different from the other services’ subpar moments. It seemed that even the interference was branded, bearing an imprint that was an artifact of countless decisions encoded into the stream. Yesterday this interference felt new, and for some time it will be recognizable. At some point will it, too, become generic, transparent, neutral?

(Photo by fdecomite, used via Flickr and a Creative Commons license.)