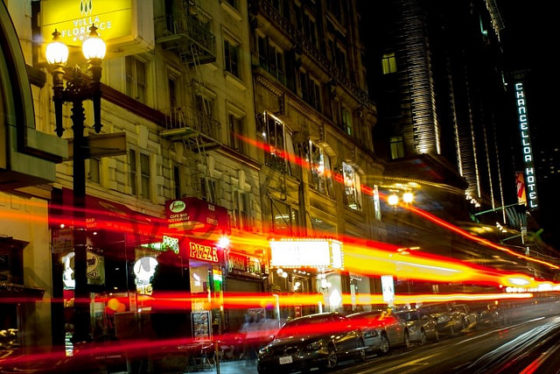 Yesterday evening I headed down the main thoroughfare in the neighborhood by foot. I walked the few blocks from my office to a restaurant, with plans to meet up for dinner. Foot traffic was fairly heavy, especially at the bus stops. People were being disgorged en masse, and then self-distributing into clumps that wandered in various directions. It was the end of the work week, a Friday, and the start of a three-day weekend, thanks to Monday’s national holiday.

The streets were as busy as the sidewalks. I only paused for red lights, and otherwise was a willing participant in the consensual choreography, the near constant motion, of urban life. Whether walking or standing still, I found myself especially conscious of the passing cars. Some honked, while others revved their engines, or changed lanes in a manner that through conscious design or mere physics emitted an aggressive noise. No matter a given driver’s mood, every car sounded forceful, violent. The mere inches between vehicles and pedestrians seemed forebodingly tight, tense, ill-planned.

It’s not that cars don’t necessarily belong in the city. It’s just that in so many cases they seem contrary to what makes the city work. Despite the threat of physical harm, for the most part everything moved in relative sync, but the outliers, through sheer threat of bodily injury, loomed larger in the consciousness. Now, the drivers who treated bicyclists like targets and pedestrians like pigeons, expecting them to shoo submissively, weren’t alone in their selfish momentum. There, too, were bicyclists who treated drivers like annoying siblings and pedestrians like drivers who happened not to be in cars at the moment, not to mention pedestrians who walked as if they were daydreaming in a large, open field.

The cars, of course, weighed more than the bicyclists and pedestrians combined, and moved decidedly more quickly. There was nothing collegial to the way the cars rushed past. The volume of their engines, the doppler patterning of their motion, the squeak of their brakes, all separated them from the rest of society. Every few cars, I’d see someone chatting away, voice muted by glass and speed. They were engaging with someone, somewhere — just not with those of us in their immediate vicinity. Even the drivers’ silence set them apart.

(Photo by Mike Klubok, used via Flickr and a Creative Commons license.)