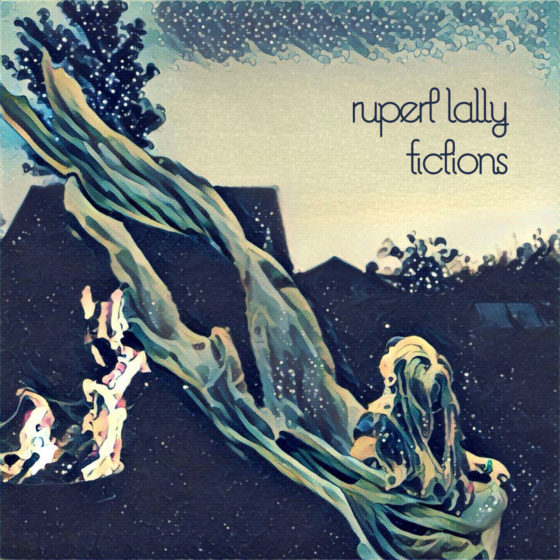 Rupert Lally, the Britain-born, Swiss-based musician, asked me to write liner notes for his new album, Fictions, which arrives to mark his 40th birthday. There are 40 tracks on Fictions, one for each of the years he has spent on the planet. With his permission, I’m posting the full text of my liner notes here. The album is available at rupertlally.bandcamp.com. The download includes a beautiful PDF of these notes, and a detailed description by Lally himself about his process.

“Truth Amid the Fictions”

These are just a few of the varied delights amid Rupert Lally’s expansive Fictions, more than three dozen tracks total, an album whose December release helps to bring the tumultuous 2016 to a close and, simultaneously, mark Lally’s 40 hyper-productive years on the planet. Happy birthday to him, happy listening to us.

There’s a track titled “August Fire”that begins with a slow-motion, broken-country vibe, all rattlesnake guitar, before descending into murky densities, the assuredness of that old-hand instrument finding an uneasy truce with impure, dark, forbidding sound design.

There’s another notable piece of close-listening material shortly thereafter in the album’s anthology-like unfolding. Titled “The Machine Breaks Down,”it provides a welcome industrial satisfaction. Its white-noise rhythm pounds away, in the distance, beneath skronky bleats that suggest an uploaded brain’s idea of an avant-noise saxophone. And yet for all the track’s admirable compactness, there’s still room for a gentle little melody that brings to mind ancient synth pop but never retreats into nostalgia.

We have access to objective timecodes, so why not employ them? Listen at around the 2:37 mark of the aptly titled “Cloudscapes”for some of the set’s most cinematic work. To call it textural is to miss the thin layers from which it’s composed. Then again, why restrict the term “cinematic”merely to music that can slip into the atmosphere. Every piece of music here seems to tell a story, perhaps some more intimate than others. “At His Bedside,”a dozen tracks earlier, plays a Satie-esque piano part atop digital strings. It’s heartbreaking, especially at 2:01 when its volume momentarily peaks, before quickly reverting to the solemn mean.

The variety on Fictions is as much a source of enjoyment as are the distinct elements of any of the individual compositions. These days the idea of a “multi-instrumentalist”— and thus of the alternate option of instrument-specific devotion that the term suggests — is somewhat antiquated, what with our age of tablet-based music-making, of laptop-powered home studios, not to mention virtual chamber-ensemble libraries and Internet archives filled to the FLAC rafters with open-source recordings. Clearly the guitar is Lally’s go-to, but the sheer range here is a testament to his desire to use the right tool toward the desired end. That isn’t just the instinct of a composer or a performer. It’s the instinct of a storyteller.

The lovely truth of Lally’s album is that the Fiction of the title is, in fact, an autobiography. There are 40 tracks here, one for each of his years thus far. These tracks may each suggest stories — of alien coyotes and subterranean adventures, of interstellar intrigue and post-singularity redemption. However, what the fictions belie is the simple fact of Lally’s singular talent and imagination. These are all him, every layer, every guitar, every synth, every texture, every beat.

Get the album at rupertlally.bandcamp.com. More from Lally at twitter.com/rupertlally