Make music inspired by a haiku, reflecting on Australian history.

Tracks will be added to the above playlist for the duration of the project. 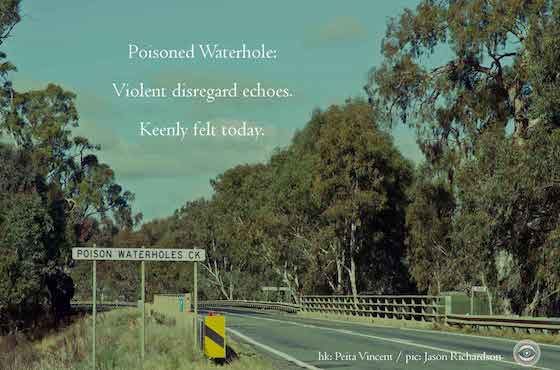 This week’s project is a collaboration with Naviar Records and Western Riverina Arts, spearheaded by longtime Junto participant Jason Richardson. The results will contribute to an exhibition in the town of Narrandera during October that incorporates haiku describing local scenes.

Step 2: Write a piece of music inspired by that haiku, which was written by Peita Vincent.

Background: This project is the brainchild of Jason Richardson. He has encouraged members of the community to write haiku describing local scenes. Those haiku have been turned into music as part of Naviar Records’ weekly Naviar Haiku series. The resulting recordings will join the haiku, photography and a textile exhibition Slow Book Haiku by Kelly Leonard Weaving and Greg Pritchard. There are also plans for Naviar Records to develop a CD featuring a selection of recordings. While the image of a poisoned waterhole speaks to many environmental concerns, the location earned its name during the “Frontier Wars” of the early 19th Century when the indigenous Wiradjuri people resisted European settlement. In the 1830s, several groups of Aboriginal families used to camp by the waterhole. Annoyed and eager to get rid of them, the local homestead owner poured drums of poison into the waterhole, killing many of them. This discussion comes as contemporary Australia reconciles colonial history.

Step 1: If your hosting platform allows for tags, be sure to include the project tag “disquiet0295” (no spaces) in the name of your track. If you’re posting on SoundCloud in particular, this is essential to my locating the tracks and creating a playlist of them.

Step 3: In the following discussion thread at llllllll.co please consider posting your track:

Deadline: This project’s deadline is 11:59pm wherever you are on Monday, August 28, 2017. This project was posted in early afternoon, California time, on Thursday, August 24, 2017.

Length: The length is up to you.

Title/Tag: When posting your track, please include “disquiet0295” in the title of the track, and where applicable (on SoundCloud, for example) as a tag.

Thanks to Jason Richardson, who proposed the project; Naviar Records, which is collaborating with Richardson on a series of haiku, as part of the ongoing Naviar Haiku community; Peita Vincent, who wrote this haiku; and Western Riverina Arts, which is hosting an exhibit that will include music from the haiku series.

Photo associated with this project is by Jason Richardson.