Rudimentary sources are a thing this week. Over at pitchfork.com, Philip Sherburne surveyed albums recorded on a single synthesizer, among them three Korgs, a Clavia, and a Casio. Meanwhile on Twitter, there were endless variations on the theme of “This is where I recorded and mixed the album and all the gear I used.” The resulting memes ranged from Tron to Teletubbies. Some, like Four Tet’s tiny studio with a view, were even believable. (My own contribution was a nested loop, beginning here.)

And then, over on Bandcamp, the Klirrfaktor uploaded a nine-track album, Lost Identity, completely recorded on a single piece of software, one that is still deep in beta. Named VCV Rack, the software is a virtual modular synthesizer developed by Andrew Belt and contributed to by a growing number of module creators. You could argue that with numerous modules, VCV Rack isn’t exactly a single instrument, but Klirrfaktor gets points for putting it to substantial use so quickly — and for eschewing rote 4/4 rhythm tracks in favor of dank industrial spaces and ominous sound design. 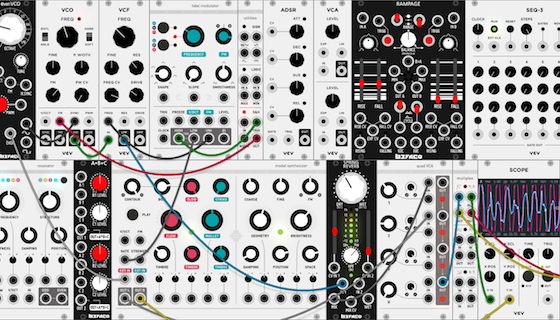 Currently in version 0.4, VCV Rack (shown above) offers a variety of true basics, like oscillators and mixers, as well as adaptations of more specialized gear, like granular synthesizers and matrix sequencers. Both VCV Rack and the Klirrfaktor album are also entirely free. You can download VCV Rack at vcvrack.com. And if you make something you’re happy with, there’s a compilation due out that you can contribute to, details at switchedonrack.com.