A podcast of drones

There are plenty of podcasts about drones, in the military-industrial-surveillance-state-toy sense of the word, and that certainly isn’t the sort of drone podcast that Dronecast is.

There are also plenty of podcasts that explore drone-music — that is, music that consists of or builds upon or, as is often the case with labels that gain some semblance of cultural traction, has a vague affinity for drones.

And then there’s the brand new Dronecast, which in its singular format is downright dronetastic. Each episode — there are three so far, in barely the first week of the podcast’s existence — plays a single drone for its entire, full-hour length. You hit play and, to borrow Brian Eno’s relevant language, experience repetition as a form of change.

Which isn’t to say the Dronecast episodes each sound the same. Quite the contrary. The debut episode is of a quickly vibrating, low-end drone, as if your ear has been put up close to a high-grade portable fan. The second episode is fiercely angelic, a heavenly choir caught in a harsh loop that locates and accentuates the razor-sharp texture of their high-pitched voices. The third episode seems to welcome a broader audience, providing something more soothingly ambient than the two earlier episodes. (Bonus: while the podscast is available through major podcast syndication services and apps, including iTunes, its webpage lets you play all the episodes simultaneously.)

Each episode is tagged with the equipment utitlized: “One hour drone. Grendel Drone Commander, effects pedals,” “Kilpatrick Phenol, Grendel Dronecommander, FX Pedals,” and “P12, Keydogs” so far. The technology isn’t of the household-name variety, but a simple Google search can reveal wonders, like the existence of this Keydog, pictured below, that simply holds a note forever: 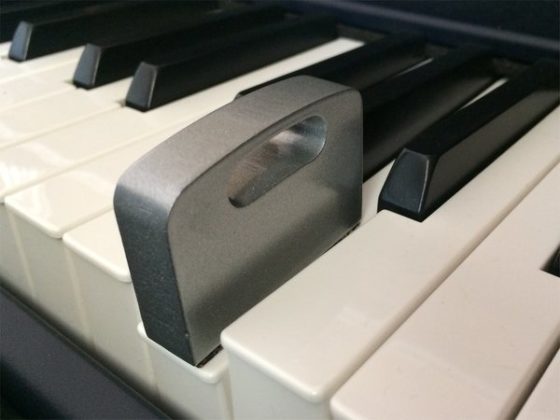 The Dronecast podcast is the work of San Jose musician Todd Elliott, who also goes by Toaster (see: toaster.bandcamp.com). Toaster’s output is quite varied, but often has a drone component, as in this solo live guitar performance from 2016:

Subscribe to Dronecast at dronecast.libsyn.com. Video originally posted at Toaster’s YouTube channel. This is the latest video I’ve added to my YouTube playlist of recommended live performances of ambient music.