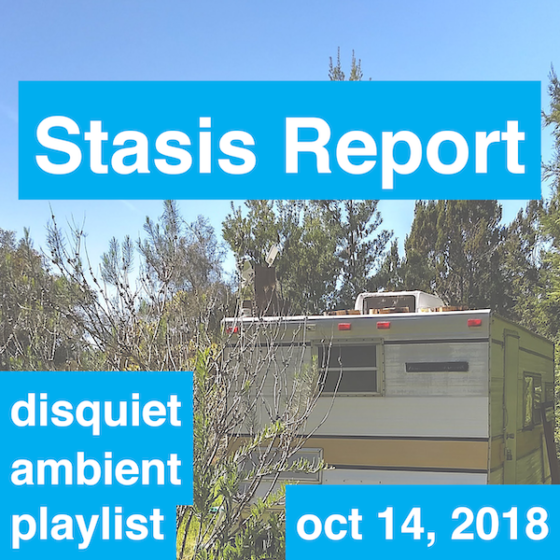 The latest update to my Stasis Report ambient-music playlist on Spotify and Google Play Music. The following five tracks were added on Sunday, October 14. Three of the tracks are from the past month, one is from the summer, and one dates back to 1991.

✚ “Full Moon Serenade” off Arrive without Leaving from Laraaji, with Arji OceAnanda and Dallas Acid, released by Flying Moonlight on October 12, 2018: bandcamp.com

✚ “The Weight of History” by Brian Eno with Kevin Shields. Initially an exclusive for Record Store Day, it was released this past week to streaming services: pitchfork.com.

✚ “Triangle Waves” by Hainbach off Ambient Piano Works, released by the Seil Records label back on July 26, 2018: seilrecords.bandcamp.com.

✚ “Phantom” by Deep Listening Band from the album The Ready Made Boomerang, recorded in the Fort Warden Cistern in 1988, and released on the New Albion label in 1991. The core bands is Pauline Oliveros, Stuart Dempster, and Panaiotis, with guests Thomasa Eckert and William O. Smith: newalbion.com.

Some previous Stasis Report tracks were removed to make room for these, keeping the playlist length to roughly two hours. Those retired tracks (from North Atlantic Drift, Mark Rushton, Les Momies de Palerme, and Grouper, plus Christina Vantzou remixing Balmorhea, and a duet of Julia Kent and Jean D.L) are now in the Stasis Archives playlist (currently only on Spotify).