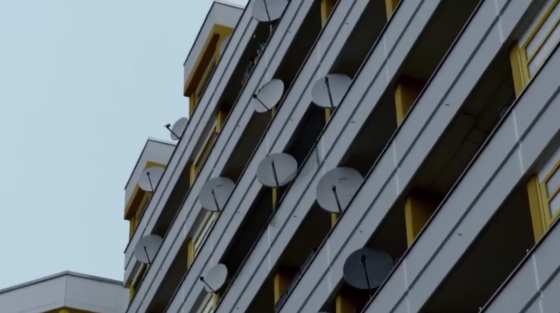 The clock is nearing 11pm on a Saturday, and another episode of Berlin Station cycles up, following immediately on the end of the previous one. Season three of the TV series, a spy drama, is underway, set in a brightly lit, contemporary Estonia under a creeping, old-school Russian curtain — or at least so things seem. It’s still early on.

There has been a break in the week’s heavy wind and rain this evening, and the house is especially quiet, little to any sound inside or out. The show’s own audio, as a result, is all the more present in the living room. The actors’ voices are hushed, anxious. The stereo spectrum of European café scenes brings the steam of espresso machines within reach. The echoes of hospital hallways on the screen are on loan to the dimly lit room in which the TV hangs.

Spy dramas, like horror movies and romances, are filled with extended sequences containing little to no dialog. Unlike the other two, spies often never reach a climax. At their best, such thrillers are often all suspense — which is to say, all suspension: not action, but the holding off of action.

Striving honorably for a proper audience to get it to another season, Berlin Station has its share of fisticuffs and explosions, but it also has a lot of attenuation — the mapping of questionable territory, enough skulking to max out a Fitbit, detailed surveillance maneuvers (the above image is from the show’s opening credits: ears are everywhere). The thing built up to by the ever-heightening if still deeply sublimated drama might simply be a piece of paper folded and handed from one palm to another surreptitiously, or a fragment of chalk being used to mark a wall in an innocuous neighborhood, or a file disappearing suddenly and almost imperceptibly on a network.

And such sequences are where the show’s composers — Reinhold Heil, who first came to prominence with Run Lola Run, on the first two seasons, and then Joseph Trapanese (Shimmer Lake) on season three — are at their best. There’s only one collection of Berlin Station music so far, from the first season, released back in 2016. Early on in it is a track titled “Dirty Laundry,” segments of synths and strings and muffled percussion that suggest something big is about to happen — and it may, but it never sounds big. (Bizarrely for 2019, this track by Heil doesn’t appear to be on YouTube, which is why I haven’t embedded it here, but it is on all the major streaming services.)

This is all a roundabout explanation — following my own recent realization — why I so enjoy watching spy dramas and related thrillers, and why I so enjoy listening to their scores. It’s why as much as I love Cliff Martinez’s music for Solaris, it’s his The Company of You Keep and Arbitrage scores that I listen to most often. The sublimated intensity that these narratives call for in their soundtracks is exactly what can make for excellent ambient music. The genre is often conflated with new age or spiritual or relaxing, but it can be very tense, as well. And like a good spy, Berlin Station‘s Heil and Trapanese do their best work in the shadows.

Update: A little over a week after this was posted, I learned that while Heil did the first two seasons, the show’s showrunner changed with season three, and with the new showrunner came a new composer, Joseph Trapanese. The article now reflects that.