Finally got to see Joseph Branciforte perform live last week for the first time, having admired his music for several years now. He is on tour with Theo Bleckmann, supporting their forthcoming collaborative album, LP1, which as the title suggests is the first of something, in this case the first from a new record label, Greyfade, founded by Branciforte. The duo performed on Wednesday, May 15, at the Center for New Music at the edge of San Francisco’s Tenderloin neighborhood, with Billy Gomberg opening up. Branciforte and Bleckmann are based in New York City, and Gomberg moved to San Francisco from New York last year. 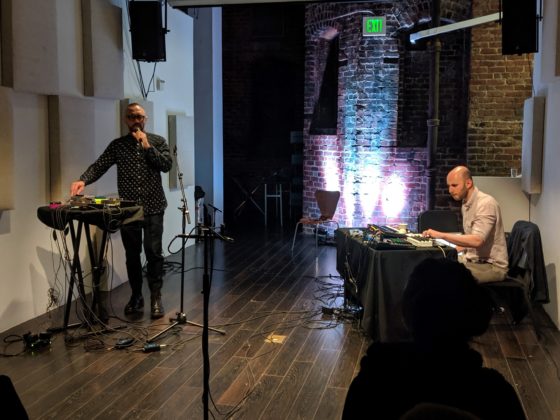 Branciforte, an accomplished producer and musician, worked with sounds manipulated by and triggered from his laptop, yielding small percussive motives and gentle washes. Bleckmann has recorded for ECM, Winter & Winter, and other labels, and his past collaborators include Laurie Anderson, Phil Kline, and Meredith Monk. He was very much the focus of the performance, a charismatic singer in a polka-dot shirt who channeled the evident power of his voice into tiny, soft gestures that he looped and transformed with a small battery of devices on an adjacent table. Together they filled the room with often fiercely quiet and delicate material, playing straight through for about 45 minutes. 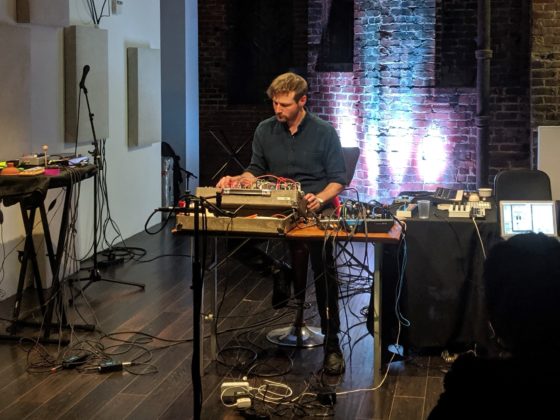 Gomberg opened the evening with a set on his economically sized modular synthesizer rig. He explained to the audience at the start of the show that the apartment building in which he lives has had renovations going on, and that the work has caused a lot of noise, noise he has in turn been filtering into his own work. In this case that meant the sounds of construction and the muffled conversations, in Spanish, of workers, which he slowly subsumed, the voices giving way over time to modestly scaled melodic pursuits. The transitions were so subtle that you had to think back to recall where your ear had been. There was an introspection to the piece that suggested someone making mental space for themselves amid the persistent cacophony.