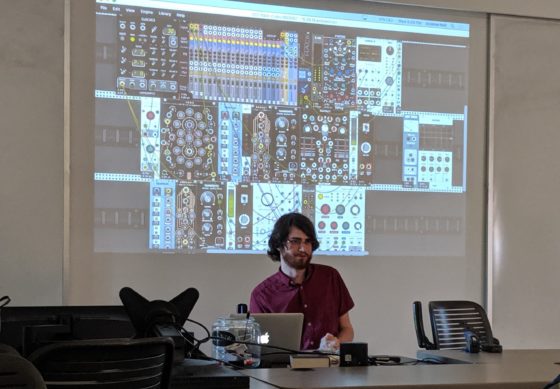 Over the past two years, a remarkable piece of free software has helped make modular synthesis widely available. The software is called Rack, from the company VCV, which like many small software firms is essentially a single person serving and benefiting from the efforts of a far-flung constellation of developers. Andrew Belt, who develops VCV Rack, this past week visited the San Francisco Bay Area from Tennessee, where he lives and works, to give talks and demonstrations. I caught his presentation at the Stanford University’s CCRMA department this past Wednesday, July 3. It was a great evening.

Belt spoke for an hour, starting at around 5:30pm, about the origins and development of VCV Rack, how it began as a command-line effort, and how then he went back to a blank slate and started on a GUI, or graphic user interface, approach. That GUI is arguably what makes VCV Rack so popular. Rack provides emulations of synthesizer modules that look just like actual physical modules, including virtual cables you drag across the screen, much as you’d connect an oscillator and a filter in the physical world. The occasion of his visit is the release of version 1.0 of VCV Rack, following an extended beta honeymoon. He covered a lot of material during the talk and subsequent Q&A, and I’m just going to summarize a few key points here:

He talked about the “open core” business-model approach, in which the Rack software is free and open source, and how third parties (and VCV) then sell new modules on top of it. (This is a bit like a “freemium,” the difference being that the foundation here is open source.)

Belt went through various upcoming modules, including a “timeline” one, a “prototype” one, a “video-synthesis” one, a DAW-style “piano roll,” and one that is a bitcrusher emulating super low-grade MP3 encoding. He didn’t mention which existing synthesizer module companies are due to port theirs over to Rack, and no one asked, likely because, this being CCRMA, the conversation was way more deep in the DSP (digital signal processing) weeds — which was great, even if 90% of that material was way over my head. He showed tons of examples, including how the new polyphony (up to 16 voices) works.

There was a great moment midway through the talk. Belt was discussing the employment of a type of synthesis in Rack called FM synthesis, and he asked if anyone in the audience could remind him who had first developed FM synthesis. One of the senior CCRMA professors chimed in and explained that we were all in this room precisely because of FM synthesis: CCRMA was funded for many years thanks to profits on the patent for FM synthesis, which was developed by Stanford professor John Chowning. FM synthesis was what made the Yamaha DX7 synthesizer a massive success during in the 1980s. For many years to follow, Chowning’s FM synthesis patent was, reportedly, the single most profitable patent in all of Stanford’s existence. After drinking in the impromptu history lesson, Belt pulled up a DX7 emulation in Rack. Someone in the audience noted how things come full circle.

This is lightly adapted from the July 7, 2019, issue of the free weekly Disquiet.com email newsletter This Week in Sound.