August 8 at the Center for New Music (SF)

I caught all three sets this past Thursday night at the Center for New Music here in San Francisco: two duets and one solo performance, all of them focused on the same underlying interaction, specifically the electronic transformation of acoustic sounds. 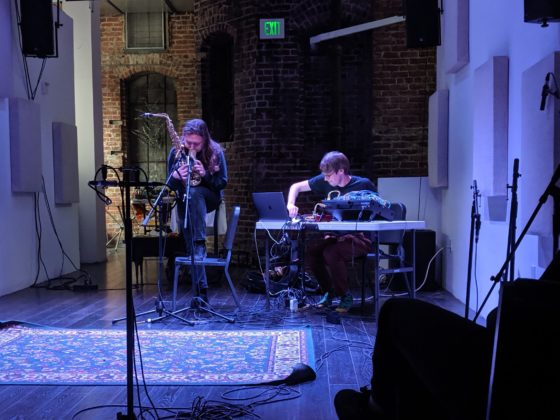 Above are the headliners, Ted Moore (electronics) and Tom Weeks (saxophone). Moore was visiting from Chicago. The remaining four fifths of the evening’s performers were all local to the area. Take a moment to note how Weeks is playing his saxophone. A lot of what Moore seemed to be doing was matching and approximating Weeks’ own playing style: the brash tones, the stop’n’start phrasing, the gritty timbres. What was all wind and saliva from Weeks was scratchy, urgent white noise from Moore. 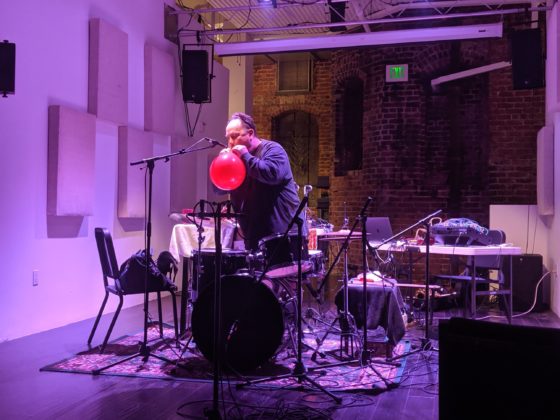 Here is half the opening act, William Winant, who performed on various pieces of percussion (including his own cartoonishly rubbery cheeks), with Chris Brown offstage doing the processing of Winant’s sounds. When the show began, Winant walked from the audience up to his drum kit, carrying a glass of water. It seemed very casual, an impression reinforced by his shorts and sneakers. However, as quickly became clear after he began playing, the water wasn’t for him. It was used to soften up and make squeaky a small hand drum he had as part of his kit. Brown’s efforts felt especially effective when they didn’t merely echo or exaggerate Winant’s playing, but regenerated it in high fidelity, as if in some other, totally imaginary space, a zone larger and more formidable than the small room in which the concert was actually physically occurring. In a way, the fact that Brown was not in view improved the work, creating more of a procedural void (a gap of cause and effect) between what Winant was enacting and what we were hearing. 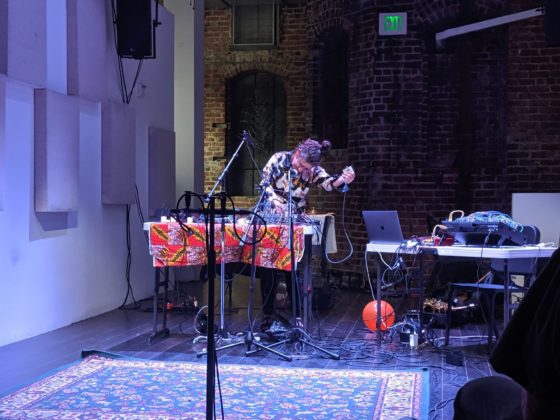 And here is the middle act, Alexandra Buschman-Román, who provided both the acoustic element (a quite powerful voice, here sublimated into whispers and quickly muttered phrases) and the electronic (a noise table packed with sonic gadgetry). I don’t have a shot of it, but one thing Buschman-Román did was to amplify yet muddy her voice by putting the microphone in the fleshy part of her neck, where it meets her jaw. The result was highly unfamiliar, and highly memorable.

Concert listing at the Center for New Music’s website, centerfornewmusic.com.